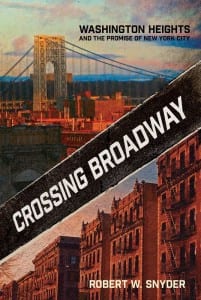 The Heights had long been a neighborhood where generations of newcomers — Irish, Jewish, Greek, African American, Cuban, and Puerto Rican — carved out better lives in their adopted city. But as New York City shifted from an industrial base to a service economy, new immigrants from the Dominican Republic struggled to gain a foothold. This was followed by the crack epidemic of the 1980s,  and the drug wars.

Robert W. Snyder’s Crossing Broadway tells how disparate groups overcame their mutual suspicions to rehabilitate housing, build new schools, restore parks, and more. This book shows how a neighborhood once nicknamed “Frankfurt on the Hudson” for its large population of German Jews became “Quisqueya Heights” — the home of the nation’s largest Dominican community.

The story of Washington Heights illuminates New York City’s long passage from the Great Depression and World War II through the urban crisis to the globalization and economic inequality of the 21st century. Washington Heights residents played crucial roles in neighborhood change, but its future as a home for working-class and middle-class people is by no means assured. The growing gap between rich and poor in contemporary New York puts new pressure on the Heights as more affluent newcomers move into buildings that once sustained generations of wage earners and the owners of small businesses.

Author Robert W. Snyder is the director of the journalism and media studies program at Rutgers University, Newark.