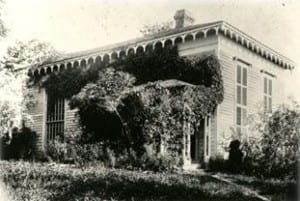 The Thomas Cole National Historic Site has announced the inaugural art exhibition in its “New Studio” building at the former home of Thomas Cole (1801-1848), founder of the first distinctly American art movement.

The New Studio, built in 1846, was designed by Cole, and demolished in 1973 before the historic site became a museum. The reconstruction, to be officially unveiled with the opening of the exhibition on May 1, 2016, provides the Site with museum-quality climate-controlled space for displaying art. The upcoming show will be the first to take advantage of that new capacity.

“Thomas Cole: The Artist as Architect” will be the first exhibition to focus on a little-known but highly significant aspect of Cole’s contribution to American art, his architectural achievements, including the design for a significant public building: the Ohio State Capitol. This is particularly notable because of Cole’s role as founder of the Hudson River School of art, which dominated American visual arts between 1825 and about 1870 and still influences contemporary artists today. The exhibition adds a new dimension to understanding and appreciating this extraordinary artist whose paintings hang in important museums around the world.

The exhibition, curated by scholar Annette Blaugrund with the assistance of associate curator Kate Menconeri, will include 29 paintings and drawings, as well as a scale model and the artist’s books about architecture. Central to the show is “The Architect’s Dream” (1840) by Thomas Cole, on loan from the Toledo Museum of Art, which is lending this unusually large painting for the first time since the 1990s. Other institutions lending works to the exhibition include The Metropolitan Museum of Art, the Albany Institute of History and Art, The Columbus Museum of Art, the Detroit Institute of Arts, and the Wadsworth Atheneum. The exhibition will run from May 1 through October 30 at The Thomas Cole National Historic Site and then travel to The Columbus Museum of Art, where it will be on view from November 18 through February 12, 2017 – within walking distance of the Ohio State Capitol.

Accompanying the exhibition will be a new hardcover book of the same title to be published in April, 2016 by The Monacelli Press. The 120-page publication contains 63 full-color images; an essay by Dr. Blaugrund about Cole’s architectural endeavors as seen in his paintings, drawings, and realized projects; a contextual essay on the legacy of Thomas Cole by Franklin Kelly, Deputy Director and Chief Curator at the National Gallery of Art; a preface by Barbara Novak, Professor Emerita, Barnard College and Columbia University, and directors’ forewords by Elizabeth Jacks and Nannette Maciejunes.

The exhibition’s curator, Annette Blaugrund, is an independent scholar, author, and curator and was director of the National Academy Museum for 11 years. She has worked at the Brooklyn Museum, the Pennsylvania Academy of Fine Arts, and the New-York Historical Society, and has taught at Columbia University, where she earned her PhD in art history. She has written numerous books on American art and received a Lifetime Achievement Award from the National Academy in 2008 and was named Chevalier in the Order of Arts and Letters by the French government in 1992. 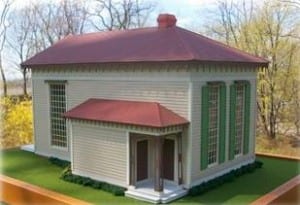 The New Studio, which will house the exhibition, has been reconstructed, after many years of research and a successful capital campaign, on its original footprint across the lawn from the artist’s home in Catskill, New York. The exterior of the New Studio is an exact recreation of the space that Cole designed for use as his workspace for the last year of his life. The interior provides a museum-quality gallery that will now be used to illuminate Cole’s art and to highlight his extraordinary influence on American art – past, present, and future.

The exhibition is supported in part by the National Endowment for the Arts as part of an over-arching project entitled “Thomas Cole and the Roots of the Conservation Movement,” designed to highlight the 19th-century tradition of conserving iconic American landscapes. Additional support is provided by the County Initiative Program of the Greene County Legislature, administered by the Greene County Council on the Arts. The accompanying printed publication is supported by the Wyeth Foundation for American Art and several individual funders.

The Thomas Cole National Historic Site is the place where American art began, as it is the home of Thomas Cole (1801-1848), the founder of the Hudson River School – the first major art movement of the United States. Cole’s landscape paintings encompassed a new-found awe for the majesty of the American landscape, and they sparked the longest running art movement in American history, including more than 100 artists in the period between 1825 and about 1870.

Thomas Cole’s original easels and art-making tools are on view in his “Old Studio”, and visitors can tour his 19th-century home and grounds, and watch a film about Cole and the Hudson River School in the visitor center. Guests especially enjoy the panoramic view from the west porch to the Catskill Mountains, which remains strikingly similar to Thomas Cole’s paintings of the same view. The site is located at 218 Spring Street in Catskill, New York. Current programs and events can be found on the website thomascole.org.

Photos of the original studio (above) and the new design (below) provided.