Since colonial times, the port city of New York has sent ships, goods and ideas to the Caribbean which in turn dispatched its own flow of staples, people, symbols and imaginative language North.

In the new show at Harlem’s Wintner-Tikhonova Fine Art Gallery open till Jan. 17, Caribbean artists show varieties of imagination rooted in that history of exchange. Francks Deceus from Haiti offers an abstracted photographic image of a dapper suited man in derby hat imprinted on an outlined version of a worker’s jumpsuit, evoking the urban and rural amalgam that haunts the identity of so many New Yorkers hailing from the Caribbean.

Deceus’s work in the show “News from the Islands: Six Caribbean Printmakers” demonstrates a command of the portrait idiom, deployed in variations on a manipulated photograph that submit the individual likeness to takes, angles and versions. In these variations, Deceus explores being close to what might be an elder relative’s portrait, and traveling far with his aesthetic treatments of it. 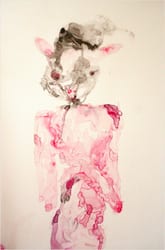 Leslie Jimenez’s delicate watercolor and ink “Fragile Families” treats a female figure as a sort of Miss Mousey of lacy lines and melting forms, hung on a bony frame that joins couture to a glimpses of the skeleton. In one corner lurks what seems to be a heart, medically rendered as organ with aorta. Wrapped in gauzy pink effects, this allusion to deep but precarious family ties evokes the history of Caribbean connections that link the artist to roots in Santo Domingo. The figure might be a doll or a childhood memory of an elegantly attired adult, drawn to underline the hazy quality of emotional memory. Born in Santo Domingo, Jimenez has studied conservation and restoration of works on paper, so her watered outlines and faded tracery might well be part of a preoccupation with the elusive and easily damaged evidence of the past. 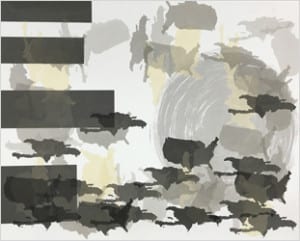 Coronado selects a palette drawn from desert camouflage — the grey, yellow, black of paratrooper’s fatigues, as if his search for the meaning of US-Dominican relations must be calibrated through a military lens. Social and political history infuse several of his works on display, produced by a master printmaker.

The Wintner-Tikhonova Fine Art Gallery has been seeking out lesser known artists who can be found in both their Harlem neighborhood and around the five boroughs, as in this show of artists mostly residing near Harlem. This show maps the twists and turns of the emotional baggage of artists situating their work in both past and present identities. The skill and nuance of the works on paper reward a close reading that suggests how much the American art world is nourished by a constant stream of artists from other places. Like the large exhibition of Puerto Rican painter Francisco Oller, soon to close at the Brooklyn Museum, artists from the Caribbean have long participated in an international exchange of visual language and symbols.