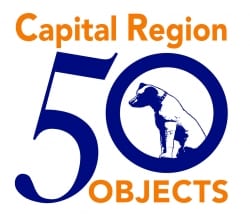 The Albany Institute of History and Art opened an exhibit in September entitled “Capital Region in 50 Objects” that runs through next April. It is a model of creative, imaginative display of historical objects, using a quotation from Henry Ford as a starting point: “Every Object Tells a Story If You Know How to Read It.”

There are 50 objects and for each a corresponding photograph putting the object into historical perspective. The captions are uniformly informative.

Its development is a model of cooperation. The exhibition was planned in partnership with the Albany Times Union, including soliciting the paper’s readers for what should be included. The Institute solicited recommendations and assistance from 114 individuals. The State Council on the Arts, the State Council for the Humanities, and the Hudson River Valley National Heritage Area provided major support. Dozens of other contributors and supporters are also acknowledged. The Institute borrowed items from 40 museums, historical agencies, and individuals.

There are stories of drama and conflict, including the coat warn by Col. Elmer Ellsworth, a Mechanicville native who was the first Union officer to die in the Civil War, in April 1861. The coat has the hole from the bullet that killed Ellsworth.

There are illustrations of the region’s industrial history, including a cast iron stove made in Green Island, Arrow Company shirt collars made in Troy, a GE refrigerator manufactured in Schenectady in 1930, and a Troy Built rototiller from the early 1980’s.

There are examples of local politics and culture, including the desk used by Erastus Corning, Albany’s longest-tenured mayor (1942-1983) and the typewriter used by William Kennedy for his 1969 novel The Ink Truck, the first of many works, including one that won a Pulitzer Prize.

Every object in the exhibit tells an interesting story.

The Institute is a good example of a progressive, versatile, and dynamic public history enterprise. Established in 1791 as the Society for the Promotion of Agriculture, Arts and Manufactures, it is the oldest museum in New York State and the second oldest in the nation (the Charleston Museum in South Carolina opened in 1773). As Executive Director Tammis K. Groft noted in a recent newsletter, “Over the years, we changed our name seven times and evolved and transformed ourselves to reflect the changing interests of our community.” The Institute includes exhibits of local significance but also holds artwork, sculptures, and other materials with statewide and even national importance. It supports an impressive research library.

Ever conscious of its own history, the Institute will open a new exhibit, “Masterworks: 225 Years of Collecting” early next year.

Strategic planning is a hallmark of most successful museums and public history programs. The Institute’s Strategic Plan, 2015-2018 is a useful model.

There is a lengthy section on the planning process itself, describing the process of discussions of the staff and board but also “community representatives, including artists, educators, interns, and community members.” This is a useful feature, often left out of plans, because it indicates how broad and far-reaching the consultative process was.

There is a central “Guiding Principle” that is the point of departure for the plan: “Audiences are central to the AIHA experience.” Among its “Core Values” is “Community” — “We have pride in the communities we serve. We are committed to improving the quality of life in the Upper Hudson Valley region through community enrichment and revitalization.”

In line with its Guiding Principle, the first (of three) strategic goals is “Enhance Community Engagement.” “Engagement” is a hallmark of leading museums and public history programs these days. The tasks under that goal in the Institute’s plan include several initiatives for more extensive collection and analysis of data about audience and visitors. but also instituting a new marketing plan and a re-branding initiative aimed at keeping the current audience but also appealing to and attractive expanded future audiences. Another task under that goal is “develop a diverse range of methods to engage the public in exhibitions, programs, and collection development.”

The plan’s other two goals — “Create a Financially Stable Institution” and “Create and foster a dynamic and diverse team of museum staff, board, and volunteers who will work together to achieve our strategic plan goals” — describe strengthening the program’s capacity to carry out its mission.

Planning can be demanding work but it also essential in part because it inspires, and serves as the basis for, engaging exhibits of the sort for which the Albany Institute of History and Art is well known. It involves asking hard questions about mission, support, and leadership. It is a useful forum for bouncing back resiliently from hard times, embracing the community and reaching out to new audiences (as the Institute plan does particularly well), resetting strategies, and laying the basis for innovative new approaches.