More than two hundred Civil War veterans and a large crowd of citizens gathered in Little Valley, the county seat, on September 7, 1914, for the dedication of the Cattaraugus County Memorial and Historical Building. A plaque above the entrance stated the structure’s purpose: “To the memory of its soldiers and sailors in the War of the Rebellion, this building is erected by Cattaraugus County.”

The Memorial thus honored almost 3,500 men who served to preserve the Union. James S. Whipple, the son of a soldier who was captured at Gettysburg and died as a prisoner of war at Andersonville (First Sergeant Henry F. Whipple, 154th New York Volunteer Infantry), opened his main dedicatory address with these words: “One need only to observe the number of people who have assembled here to appreciate the fact that all of you consider this more than an ordinary occasion. The day, the purpose for which you are here should and will be long remembered.” And so Cattaraugus County’s most representative and significant Civil War monument was dedicated.

That day, fifty years after they had fought in the Petersburg and Atlanta campaigns, the old soldiers proudly posed for a panoramic photograph in front of the handsome monument that the county had built to commemorate their service. The veterans meant for their Memorial to stand for the ages. Now, a century later, its fate is clouded in uncertainty. 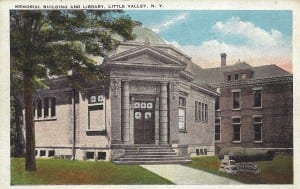 For ninety years, the Memorial and Historical Building served its purpose in housing Cattaraugus County’s historical museum, its holdings including a large number of Civil War weapons, uniforms, and relics. But as the decades passed the Memorial suffered from inadequate maintenance. Its distinctive glass dome and neoclassical pediment were removed, together with other decorative flourishes. Museum staffers complained of a leaking roof and of legislators indifferent to the Memorial’s plight.

A further indignity came in 2004, when the museum was moved from the Memorial to Machias, a village more than twenty miles distant from Little Valley. The museum’s new home was the Stone House, the former county poor house, which had undergone a $1 million restoration while the county continued to let the Memorial and Historical Building decline. Since the move, the Memorial has sat vacant.

The crowning blow came on October 23, 2013, when the county legislature voted to use $125,000 in casino funds to demolish the Memorial and Historical Building and a later attachment, the former Board of Elections building.

The day after the vote I received an e-mail from Kyle Stetz, a Cattaraugus County native then living in North Carolina, notifying me of the situation. Kyle was aware of my work as historian of the 154th New York, Cattaraugus County’s most representative Civil War regiment. Eight of the 154th’s ten companies had been raised in Cattaraugus. Many veterans of the regiment – including my great-grandfather, former corporal John Langhans – were present at the dedication of the Memorial and Historical Building in 1914, together with comrades from the 37th and 64th New York Volunteer Infantry, the 9th New York Cavalry, and many other units.

I immediately composed a notice about the plan to demolish the Memorial and e-mailed it to hundreds of 154th New York descendants I had linked with over decades of research. I also sent it to the county legislators and the two main county newspapers, and followed it up periodically with other missives. Soon, the county legislators were flooded with e-mails protesting their plan. One legislator later remarked that he had not seen so much mail concerning a single issue in his ten years of serving.

A regimental descendant, Nancy Bargar, voiced our opposition in a news segment for a Buffalo television station. “I think we can’t be cavalier about a memorial to veterans of the past,” she said. “Because that sends a message to the veterans of today that I think is unacceptable.”

The widespread protests gave the county legislators pause. As Kyle Stetz, Nancy Bargar, and I continued to muster opposition to the demolition plan, the legislators put the plan on hold. While still insisting the Memorial must be razed, they put forth a couple of face-saving proposals: to move elements of the Memorial to the Stone House in Machias, or to incorporate them in a new memorial on the Little Valley site. These sops, however, did nothing to appease us opponents of demolition.

“Will any new Civil War memorial you concoct have the substance, symbolism, dignity, and historical significance of the Cattaraugus County Memorial and Historical Building?” I asked in another letter to the county legislators and administrators. Nancy Bargar was given privilege of the floor at a legislative meeting and asked the representatives “for your open mindedness, and to sit on this decision to bring down the building.” In response, the legislature put on hold a resolution to take no further action to demolish the memorial “until all options for its preservation have been explored.” 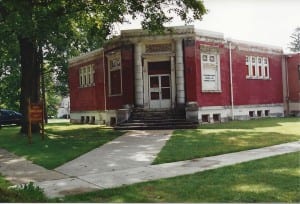 In the meantime, I wrote to the Rochester-based Landmark Society of Western New York (LSWNY) to apprise them of the situation. Nine days later, on November 19, 2013, LSWNY staffers toured the Memorial accompanied by Nancy Bargar. A subsequent LSWNY memo to the country administrator stated that the Memorial’s condition was not cause for demolition, that it could be economically rehabbed and adapted to a new use. LSWNY staff followed up in a meeting with county administrators and legislators in March 2014. But despite the massive protest by descendants of Cattaraugus County Civil War soldiers and the professional advice of the LSWNY, the county took no action to reverse its course toward demolition, nor did it respond to the LSWNY’s recommendations. The situation settled into a stalemate.

In September 2014, one hundred years after the Memorial and Historical Building was dedicated, a letter from Nancy Bargar, Kyle Stetz, and me arguing our case was published in the Olean Times Herald. “It is not merely a building,” it stated of the Memorial, “it is the county’s most significant and distinguished Civil War monument.” Within days, a special legislative subcommittee was named to decide what parts of the Memorial to salvage and display as part of a new Civil War memorial arch above – of all things – a parking lot. A few weeks later, the legislature voted to deny a motion to delay for one month a vote to proceed with asbestos removal prior to demolition.

One problem that we fledgling preservationists faced was the fact that many of us were outsiders. I live in Rhode Island, Kyle Stetz had moved to Virginia, Nancy Bargar lives in Cattaraugus’s neighboring Chautauqua County, and most of the protesters who bombarded the county legislature with e-mails live outside of New York State. What we needed was a grass-roots organization dedicated to our goal and centered in Cattaraugus County.

That crucial development occurred in November 2014 with the formation of Citizens Advocating Memorial Preservation, or CAMP, chaired by Tom Stetz of Allegany (Kyle’s father). The group’s stated mission was to preserve the Memorial and Historical Building, and to urge its restoration and reuse.

In the year since its formation, CAMP has made great strides towards its goal. The group has grown from a handful to about ninety members. It applied for and was awarded a grant from the LSWNY that funded a comprehensive historic preservation plan by Clinton Brown Company Architecture of Buffalo, specialists in the field. The county legislature granted it time to complete and submit the plan. It developed and posted a website (http://cattcomemorial.com/) with links to Facebook and Twitter. The Civil War Trust, the nation’s premier battlefield preservation organization, endorsed it, as did the Cattaraugus County American Legion. It uncovered a set of the original plans for the Memorial by the Jamestown architectural firm of Freeburg and Fidler. It held a moving ceremony at the site on Memorial Day 2015.

CAMP has gathered hundreds of signatures on petitions and thousands of dollars in donations in support of its effort. It is taking steps to incorporate as a non-profit to qualify for IRS 501 (c) (3) status. In the meantime, it affiliated with the Cattaraugus Region Community Foundation, which enabled it to receive tax-deductible donations. It continued to spread word of its quest on its website, in newspapers and blog postings, and on the radio. The Clinton Brown Company report was well received by the county legislature (although that body has yet to issue a formal response to it). And around the time of its first anniversary, CAMP members were delighted to learn that the LSWNY included the Memorial and Historical Building on its “Five to Revive” list of “key properties on Western New York that are in need of investment.” Thus the LSWNY will work collaboratively with CAMP and the county to foster rehabilitation and facilitate investment.

What will ultimately happen to the Cattaraugus County Memorial and Historical Building is yet to be determined. But at this time, two years after the county voted to demolish it, it appears the venerable Civil War monument has a fighting chance to continue standing for another century and more.

Photos, from above: Veterans at the dedication of the Cattaraugus County Memorial and Historical Building, 1914; A postcard view of the Memorial, date unknown; and the Memorial in the summer of 1993. Photos from the author’s collection.