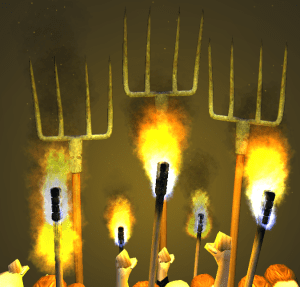 In early October, the New York Cultural Heritage Tourism Network under the leadership of Spike Herzig, a member of the Tourism Advisory Council, hosted a meeting in Seneca Falls for the Women’s Suffrage Centennial.

There were about 85 attendees, mainly from the central New York region. The purpose was to meet, learn, and plan for the upcoming centennials of women gaining the right to vote in New York State (2017) and the United States (2020). The event’s agenda was abandoned as members of the history community began to air their frustrations over Empire State Development’s role in heritage tourism.

It started during the lunch break when Professor Emerita Judy Wellman, SUNY Oswego, informed me that she would be mentioning me in her presentation. One of her slides referred the audience to my posts here at The New York History Blog on the Path through History and the Consolidated Funding Application (CFA) for grants through the Regional Economic Development Councils (REDC).

On her slide, Judy referred to the Path project as “virtually defunct” although that’s not the wording she used when speaking. Certainly the History Task Force is defunct. It should be reconstituted, as it would give the history community a voice that is lacking at present at I Love NY and on the Tourism Advisory Council.

The Path through History project does exist as signs, a website, a logo, and a renamed Museum Weekend. When Judy referred to the sad state of the Path project, I glanced to the back of the room where Gavin Landry, Executive Director of Tourism, for Empire State Development, and the organization’s Vice-President for Marketing Initiatives Ross Levi were leaning against the wall. I observed Landry stiffen. Clearly he was not happy – and they were scheduled to speak next.

Landry and Levi’s presentation was similar to the one they had delivered at the most recent Museum Association of New York (MANY) conference. Together they extolled what I Love NY has done and is doing on behalf of tourism in New York State. There was an effort to localize the presentation by referring to a “Familiarization Tour” that brought journalists upstate and included women’s history sites in the Finger Lakes region.

Here was the first problem. Here are the key REDC grants (excluding the OPRHP grants to individual historic sites) for the Finger Lakes region for 2014:

At The New York Times Travel Show in January 23, Landry reported that the state produced 180 million bottles of wine last year, second highest in the country. Clearly this is big business. The Finger Lakes wine region was named “Wine Region of the Year” by Wine Enthusiast last October and named one of the top-ten destinations for 2015. So it is easy to understand the emphasis on supporting winery tourism.

The concerns of many members of the Finger Lakes history community who were present however, were that the promotion of history tourism suffers in comparison. While all the REDC award winners are perfectly valid, there was mention of the history sites in any of them.  It might have been helpful if Landry and Levi had investigated what the region was awarded, what has transpired since the grants were awarded, and where the Women’s Suffrage Centennial fit into them, rather than talking about how wonderful I Love NY is.

Let’s consider the items Landry and Levi did mention.

1. I Love NY promotes one-day bus trips from New York City – exactly what is the relevance of this for central NY?

2. I Love NY lists events on the Path through History Weekend – what happens if an historic birthday, death, or anniversary of an event does not occur on that weekend? What happens if a history conference which people might travel to attend, does not occur on that weekend? At present there is no provision in Path through History as it operates to promote events other than on a single weekend. It should also be noted that I Love NY has picked Father’s Day as the weekend for the renamed Museum Weekend. Think of the irony of the situation. Two men from NYS telling people at the Women’s Suffrage Centennial Conference that if they choose to have an event on Father’s Day weekend, I Love NY will list it! Isn’t that helpful! I am not making this stuff up.

As Landry and Levi spoke about all the wonderful things I Love NY has done, there was a breaking point. Landry spoke about his extended efforts to promote tourism in China. Can you imagine China promoting Civil Rights sites in America?

Finally, Tracy Penn Sweet, Program Director of the Women’s Suffrage Centennial Project in New York City, raised her hand asked: “Can I interrupt your canned presentation? What are you doing for suffrage?”

Let historians record that this was the moment when I Love NY came face to face with the grassroots history community. A hush enveloped the audience. The tension was so thick you could cut it with a knife.

After only a moment that seemed an eternity, Landry replied, “I am going to continue with my presentation”, and he did. But the disconnect between I Love NY’s canned presentation and the needs of the grassroots history community had been exposed. The conflict carried into the question and answer session that followed.

Martha Robertson from the Friends of Women’s Rights National Historic Park in Seneca Falls (and also a Tompkins County legislator) said there was a need to be proactive.  Susan Fuller pointed out that many history organizations are too small for the state’s grant funding process.  Another person also made the point of the plight of small organizations, of the need to make heritage tourism a priority, and the need to meet with the local tourism professionals.

Janet Clerkin, Oswego County Tourism, said that I Love NY advertising had increased tourism to Oswego. She was referring to the Governor Cuomo’s award of $1 million in 2012 at the birth of the Path through History project. Oswego used its share for tourism marketing.

Susan Zimet of 2020: Project Women passionately exclaimed that with a centennial, now is the time to act otherwise we have to wait a century!

Quite true. While Lauren Kushnick of the New York Council for the Humanities gave a presentation on the programs that organization had to offer, I Love NY gave a mismatched presentation that was of little use to this or any history community.

When Gavin Landry left at the end of the presentation, I thought I detected steam coming from his ears. Ross Levi fielded some questions in private in the hallway outside.

So where to we go from here?

1. The Path through History Task Force needs to be re-instituted so the history community has a voice.

2. I Love NY needs to better prepare itself for meetings with the grassroots history community.

3. The Women’s Suffrage Centennial Conference needs to develop an agenda of action items and necessary funding, and then lobby legislators in March or April.

It’s one thing for the Governor and State Legislators to ignore mostly upstate military history, but it’s quite another to more widely antagonize women both upstate and downstate by ignoring such important history.

This means those interested in the Women’s Suffrage Centennial have an opportunity to take a leadership role on behalf of the entire history community. That’s assuming they lobby on the larger community’s behalf, rather than just the immediate needs of the Centennial.

Now that those interested in the Women’s Suffrage Centennial have seen first hand the inadequacies of the Path through History, and realizes that I Love NY has only limited value in promoting its programs, perhaps they will take up the mantle on behalf of the entire history community and get Governor Cuomo’s attention.