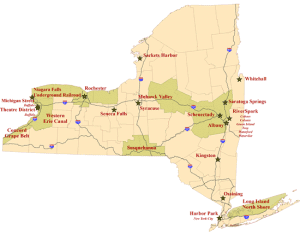 New York State has heritage areas – 19, scattered around the state.

The New York State Office of Parks, Recreation, and Historic Preservation (NYSOPRHP) defines these areas on its website:

The Heritage Area System (formerly known as the Urban Cultural Park System) is a state-local partnership established to preserve and develop areas that have special significance to New York State. From the Great Lakes to the eastern tip of Long Island, the Heritage Areas encompass some of the state’s most significant natural, historic, and cultural resources, as well as the people and programs that keep them vital.

These are area designations created through state and local partnerships.

This was bit of a shock to me. I have been to Ossining. I have spoken with people about Ossining history including the State Assemblywoman Sandy Galef and her assistant Dana Levenberg who attended several Regional Economic Development Council (REDC) workshops and training sessions. I attended the public session in Ossining on the proposed Sing Sing Museum (recipient of a 2014 REDC grant). At no time in these various meetings did the subject of the Ossining Heritage Area come up.

With this background in mind, I inquired of the NYSOPRHP representative about how the funding for the heritage areas works. They don’t function like state historic sites which are funded through the NYSOPRHP budget. There is funding set aside for them within the REDC process either. The $16 million available through the REDC in 2015 will be split among recreation, historic sites, and heritage areas based on the applications.

I suspect based on experience the heritage areas are likely to received $0, in part because there will be no applications. The NYSOPRHP representative agreed, though not in these words, that the heritage areas exist more on paper and as a website than in actuality.

After the workshop, I investigated these heritage areas. The NYSOPRHP website for the Ossining Heritage Area links to Historic Hudson River Towns. Its executive director Jerry Faiella attended the same REDC workshop I did. By coincidence I spoke with him during a session on the Marketing NY program. The emphasis here was to promote the Hudson Valley as a tourist destination. If I had known he was the link for the Ossining Heritage Area I would have asked him about… or when I had seen him earlier at the Sing Sing Museum presentation. On his   Historic Hudson River Towns website list of projects there is no mention of a New York State Heritage Area. Clearly this is a Heritage Area which doesn’t really exist except on the NYSOPRHP website.

I also checked the RiverSpark Hudson River Heritage Area. During some events I organized, Tom Carroll, then executive director of the Heritage Area and of the Hudson Mohawk Industrial Gateway, led us on some walking tours in Troy. There was a Visitor Center there, so perhaps that was the Heritage Area. Last year I attended a library program at SUNY Albany and there was a display table for this Heritage Area but it didn’t seem that much was happening there. The link from the NYSOPRHP website led to the RiverSpark website where this message appears:

I hesitate to guess how long that message has been up. Suffice it to say, this heritage area doesn’t seem to really exist either except on the NYSOPRHP website.

Turning to the perennial Albany whipping boy for New York history, the Mohawk Valley also is listed as a heritage area. It hasn’t yet disappeared from NYSOPRHP as it has as a Path Region. The link from the NYSOPRHP website is to the Central NY I Love NY website which includes Broome County. What makes this a Mohawk Valley Heritage Area escapes me. Again, it doesn’t seem to exist as a Heritage Area except on the NYSOPRHP website.

I did not pursue the other 16 Heritage Areas. If any of them exist in substance, please respond below and alert the New York State history community of your existence. Technically since they are state-local partnerships, it’s possible a local organization that is nominally part of the partnership is functioning on its own.

In July, NYSOPRHP Commissioner Rose Harvey had a letter published in the Albany Times Union on this topic. In it, she takes issue with Paul Bray (recently appointed to the advisory board for the Museum Association of NY), who she describes as someone who helped to create the New York state Heritage Area program in the 1980s.

Harvey specifically questioned Paul Bray’s assertion that New York State has not provided any support. She claims that over four years of REDC funding the Heritage Areas have received 25 grants totally over $6.4 million (or approximately $1.6 million per year). No comment was made about what happened before the REDC process began.

Paul Bray is founding president of the Albany Roundtable civic lunch forum. He writes frequently for the newspaper and occasionally here at the New York History Blog (including last year on this very subject).

This past August he wrote in the Times Union:

“…our state parks agency abandoned the state heritage areas and their law [requiring their support], leaving the responsibility to local governments.

“Some heritage areas have had success; others have failed for lack of state partnership support. This abandonment of the state heritage area law, which remains in the state law books, is a sad example of the failure of the rule of law by the state of New York.”

In May, he wrote a post for the Living Landscape Observer. Again he reviewed the history of the program from Governors Mario Cuomo to Andrew Cuomo, concluding:

“Two years ago when current Governor Andrew Cuomo sponsored a conference on heritage tourism, representatives from the National Trust for Historic Preservation led the program and said New York State is fortunate to have a State Heritage Program. At the OPRHP table outside the meeting room, when asked for information on the State Heritage Areas, a representative said “we don’t do that program any more”. Technically by law that was not true, but in effect that is how the State Parks Agency has acted and the new era of parks in NYS, state heritage areas, has been abandoned by the very agency that created the award winning plan for state heritage areas.

“What is happening in NYS is contrary to an enduring heritage of parks like Olmsted’s Central Park and Prospect Park in New York City, great traditional state parks and urban parks that the State’s highest court, the Court of Appeals, has protected through the public trust doctrine. It is very regrettable that the highest stewards of NYS parks, the Governor (the son of the former Governor who oversaw the creation of heritage areas) and the State Parks Commissioner, may have found a way to stifle State Heritage Areas that embody the great heritage of their State.”

My own personal experience at the Mid-Hudson REDC meeting was very similar to Paul Bray’s at the heritage tourism conference. Rose Harvey’s citing of the Path through History as an example of Andrew Cuomo’s commitment to New York State history was unfortunate given its lack of dedicated staff, lack of dedicated funding, or existence beyond a website, signs, and people saying the phrase “Path through History” in press releases and at conferences. Even the Governor’s summer tourism press release ignored it. For people familiar with the shortcomings of the Path through History, her referencing that failed project undermines her position on the Heritage Areas.

Are NYS Heritage Areas Real or Not?

What is of primary importance is the claim of $6.4 million in grants in support of the heritage areas. In my post this past January on REDC grants for 2014 by the NYSOPRHP, I wrote:

“This is for projects to acquire, preserve, rehabilitate or restore lands, waters or structures, identified in the approved management plans for Heritage Areas designated under sections 33.03 and 33.05 of the Parks, Recreation and Historic Preservation Law, and for structural assessments or planning for such projects. Some of the funding is substantial.”

In reviewing the list of awards, I did not see anything in Ossining, Riverspark, or the Mohawk Valley that appeared to me to be for heritage areas. The grants throughout the state seemed to be for preservation of specific sites as one would expect. In the post I wrote:

These awards reveal that for the history community, NYSOPRHP is the place to go for serious money involving bricks-and-mortar capital spending. There is nothing particularly new in this observation… I suspect that the word “tourism” appears in the descriptions of some of these awards because of the new emphasis on job creation in the funding process and the awareness that “tourism” is key jargon term in obtaining funds.

I invite Rose Harvey to write a post for the New York History Blog which identifies the 2014 REDC grants for Heritage Areas.

This is an opportune time to establish if Heritage Areas are something more than a logo or brand name, and how they fit into NY Parks 2020, the Governor’s and Rose Harvey’s vision for New York State parks and historic sites (available as a pdf here).

A search for the phrase “Heritage Area” returned no results.