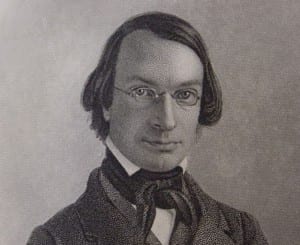 The idea of promoting the changing colors of the leaves on the trees to encourage tourists to visit an area did not exist much at all before the late 1930s, and although both the Berkshires in Massachusetts and the Poconos in Pennsylvania were promoting fall foliage tours as far back as the 1940s, the Catskills did not begin to cash in on the idea until the 1950s.
That is not to say that Sullivan County’s autumnal beauty went unappreciated before then, however. October has always been a special month, and not just because it brings with it major league baseball’s World Series and the pageantry and spectacle of college football.

For example, as far back as 1825, the poet Alfred B. Street was an unabashed booster of the natural beauty of Sullivan County in general, and especially of the magnificence to be found in the forests of the Shawangunk Mountains and the Delaware Valley, of the Beechwoods and the Neversink Gorge as the leaves took on a wide array of colors under October skies.

Street grew up in Monticello, and wrote mostly in the mid-19th century, just before tourism made its initial impact on the area’s economy. In fact, his vivid depictions of the attractiveness of local landscapes, and of the abundant fishing opportunities here did much to encourage the earliest vacationers to make Sullivan their destination.

Literary critics of the day rated Street at “the top of his class” among descriptive poets– those who wrote predominantly about nature– and regarded him among the greatest American poets of his time, ranking him with Bryant and Emerson and Longfellow. He was so identified with and appreciated for his word-portraits of nature’s majesty that in reviewing one of his volumes of work, The Protestant Churchman noted that “he describes nature as seen in the depths of our noble forests, by the side of our glorious rivers, on the lakes and mountains, and he thus strikes a chord to which every heart responds.

“With all his truthfulness and life-like painting, with all his vivid and spirited sketching of nature, animate and inanimate, we feel that his genius would have been wasted and misapplied upon any other than home (American) scenes and events, and we are so far jealous of his muse, as to hope that his fine poetic powers will never be diverted from illustrating the history and scenery of his native land.”

Street himself acknowledged that he preferred to write about nature, and he credited spending his formative years in and around Monticello with inspiring him to do so.

“The early life of the author was spent in a wild and picturesque region,” he wrote of himself in the preface to the first collection of his poems. “Apart from the busy haunts of mankind, his eye was caught by the strongly marked and beautiful scenes by which he was surrounded, and to the first impressions thus made may be attributed the fact that his subjects relate so much to Nature and so little to Man. Instead, therefore, of aiming to depict the human heart, he has endeavored to sketch (however rudely and imperfectly) the features of that with which he was most familiar.”

He wrote glowingly of such well-known Sullivan County landmarks as the Mongaup Falls – which rated two of his better known poems – White Lake, Kiamesha Lake, the Willowemoc and the Callicoon Creek.

The changing world of autumn was one of the poet’s favorite subjects. The collection of his works published by Clark & Austin in 1845 includes such titles as “A September Stroll,” “An October Ramble,” “An Autumn Landscape,” “Indian Summer,” and “The Callicoon in Autumn.”

Perhaps none of Street’s poems better illustrates his preference for the fall than “October Ramble,” written around 1840, before Sullivan County’s natural beauty had been spoiled by the rise of the tanneries, the railroads and the resorts.

A glorious afternoon; the moving shades
Have wheeled their slow half-circles, pointing now
Toward the sunshiny east; a shadow haze
Trembles amidst the azure overhead,
Deepening to purple at the horizon’s skirts.
Nature is smiling sweetly, and my feet
Are wandering in the pleasant woods once more.
Keen nights have told of Winter on its way,
And Autumn from the dark gaunt trees has drawn,
(Save a few shreds upon the beech and oak)
His gorgeous robe, and cast it o’er the earth
For Indian Summer’s glimmering form to rest
Awhile upon it, ere the blighting frost
And muffling snow. More golden is the sun
Than in its summer radiance, and it throws
Its charm on all around. Along this path
I tread, light-hearted, glad to be alone
With nature. Beautiful and grand art thou!

The poem continues for two more pages, with each line providing a look at the majesty that nature bestowed upon the county as only Alfred B. Street could. And while that beauty did not endure – the lumberman and the tanner of the late 19th century saw to that – it has been reincarnated, to some extent at least, and a visit to Sullivan County in autumn is still awe inspiring.

Photo: The once popular poet Alfred B. Street was born in Poughkeepsie, but grew up in Monticello and his life in Sullivan County heavily influenced much of his work.