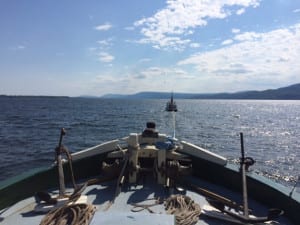 The Lake Champlain Maritime Museum’s schooner Lois McClure, in anticipation of her twelfth year of operation, has been taken to the New York State Canal Corporation shipyard at Waterford, NY for a haul-out and hull maintenance. There, a team of shipwrights working with David Short of North Atlantic Shipbuilding and Repair, of West Montville, ME are expected to replace worn, damaged or rotted planking and timbers and recaulk seams.

Launched in 2004, the replica 1862 canal schooner Lois McClure embarked on eleven journeys with her faithful sidekick and essential power source, the tug C.L. Churchill. Having logged over 5,200 miles on our interconnected lake, canals and rivers, she has ventured as far south as New York City, as far west as Buffalo, and as far north as Quebec City engaging people in the history and archaeology of their waterways. Over 220,000 visitors have stepped on board in 220 communities, and learned of shipbuilding races, naval battles, lake ecology, shipwreck preservation and invasive species.

“Caring for a wooden boat is an ongoing process, much like owning an automobile,” Deputy Director Erick Tichonuk, who oversees schooner operations, said in a statement to the press. “It’s never finished, always an ongoing process. As these boats age, greater maintenance and occasionally a larger project are needed. And with replica vessels, we learn a lot from experience, since the boatyards and crews of the past are long gone.”

Annual maintenance of the schooner includes safety inspection and repairs or replacements of accessible portions of the vessel showing wear or rot. Over the years, sections of decking have been replaced, rigging has been repaired and replaced, and repainting is always part of the program. The biggest project so far was replacing the foremast in 2011. 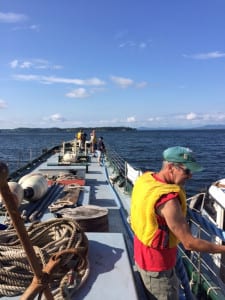 What’s different about the ten-year haul out? Every five years, the vessel undergoes a hull inspection which requires haul-out, during which careful scrutiny is given to the vessel, especially areas below the waterline which are inaccessible during normal operations. Any areas needing work are identified, and assessed. Immediate repairs are undertaken and larger repairs, especially any below the waterline, are scheduled.

The time in dry dock this fall is our opportunity to tackle any issues below the waterline. Since there is only one facility in the Champlain Valley that could handle this vessel, these repairs have had to wait for the availability of a dry dock with facilities to handle the boat, and the availability of skilled shipwrights.

“The scale and scope of the dry dock at Waterford is phenomenal,” notes Tichonuk. “When flooded it’s equal to five barge canal locks in scale – we will be in there with other boats at the same time. We will make the most of this opportunity to witness another aspect in the life of a working wooden canal boat. The dry dock is historic in and of itself.”

Shipwright David Short of North Atlantic Shipbuilding and Repair has also made his mark in schooner restoration with work on the Lettie G. Howard of South Street Seaport and the Bowdoin, originally built for Arctic exploration.

The Lake Champlain Transportation Company and the New York State Canal Corporation both provided in-kind services to reduce the cost of this work.

More information about the schooner Lois McClure can be found online.