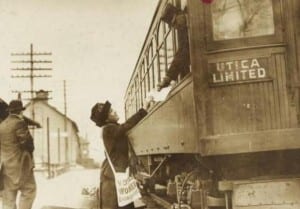 On August 11, 2015 the Woodstock, NY town board unanimously passed a resolution to support New York State’s 2017 suffrage centennial by making a priority of sharing the story of Woodstock women with a larger audience.

The resolution sketched out a plan for the town to promote and participate in the state’s centennial observance by sponsoring events and making a priority of educating the public about Woodstock’s women and New York State’s role in the women’s rights movement in the United States.

“Woodstock became a key destination for votes for women activists associated with the later women’s suffrage movement,” said Olivia Twine, a Woodstock resident and supporter of the resolution that links the state centennial observance with economic development and cultural heritage tourism.

“Activists like Charlotte Perkins Gilman retreated to Byrdcliffe in Woodstock to write, socialize with friends and other artists, and refresh themselves during the last grueling decade of the suffrage movement prior to the ratification of the 19th Amendment in 1920,” Twine told the New York History Blog.

The Woodstock town board resolution expands local public support for the state centennial in NYS. Woodstock joins New York City, which has made a similar commitment to the 2017 centennial through its Department of Records and Information Services. The city agency has plans to sponsor suffrage-related events and exhibits from now through 2020, the nation’s observance of 100 years of American women voting. During its 2015 session, both houses of the NYS Legislature passed bills to create a state suffrage centennial commission for 2017.

Resolution passed August 11, 2015: To Mobilize Recognition of Woodstock Women during the years 2017 and from now through 2020 to celebrate the New York State and National Suffrage Centennials.