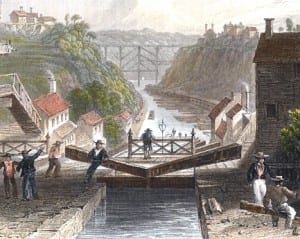 Frank Taormina, retired social studies teacher and lecturer at Union College will be giving a talk on the history of the Erie Canal. The contemporary Erie Canal has been much in the news lately. The Erie Canal played a significant role in the history of New York and the nation and helped make the “Empire State”.

The original Erie Canal ran about 363 miles from Albany to Buffalo (the Hudson River to Lake Erie) creating a water route from New York City and the Atlantic Ocean to the Great Lakes. The canal helped the City of New York eclipse Philadelphia as North America’s largest city and port.

The original canal contained 36 locks and opened October 26, 1825 at a time when bulk goods were transported by wagons and pack animals, and there were very few steamships or railways, water was the most cost-effective way to ship bulk goods. The Erie Canal cut transport costs by about 95%, boosted the population of western New York, and opened the west to extensive settlement. The original canal was enlarged between 1834 and 1862. The canal is now part of the New York State Canal System (formerly the New York State Barge Canal).

In 2000, the United States Congress designated the Erie Canalway National Heritage Corridor to recognize the national significance of the canal system as one of the most important works of civil engineering and construction in North America. Today, it is mainly used by recreational watercraft.

The Erie Canal history talk will take place on August 25th at 6:30 pm at Schoharie Crossing in the Enders House, adjacent to the Schoharie Crossing Visitor Center in Fort Hunter, New York. This event is sponsored by the Friends of Schoharie Crossing. There will be a very brief meeting of the group before the lecture, and refreshments will be served following the talk. All are welcome to attend.

For more information call the Visitor Center at (518) 829-7516; email: SchoharieCrossing@parks.ny.gov.