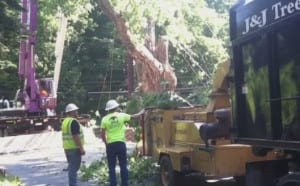 DEC issued a statement to the press saying the tree was deemed “an immediate threat to passing traffic” by DEC and Newburgh officials, “due to its deteriorated condition and a greatly expanded crack”.  The statement said DEC consulted with a professional arborist who inspected the tree and found it to be an extremely high risk to public safety and recommended removal.

“It is with deep regret and sadness that we make the decision to remove this historic and much-beloved tree that has been a historic symbol for Newburgh and the region for generations,” said Acting Commissioner Marc Gerstman . “However, the damaged tree poses a significant public safety risk that makes its removal necessary.”

DEC took the tree and supporting infrastructure down and is expected to begin the process of preserving the site as a public park. DEC has been working with town officials, adjoining landowners and stakeholders to discuss future management of the site and possible uses for any usable wood that can be salvaged from the tree, their statement said.

Attempts to propagate the tree by professional botanists, using cuttings from the tree, have proved unsuccessful according to DEC.  A neighbor did have success with a cutting and has progeny of the tree growing in his yard. DEC’s Saratoga Tree Nursery staff have agreed to take more cuttings in an attempt to perpetuate the tree. 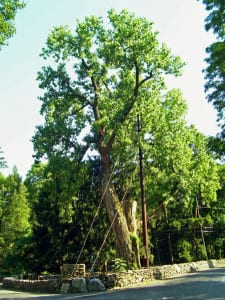 The Balmville Tree was over 98 inches in diameter at breast height and at over 300 years old, it is considered to be the oldest living eastern cottonwood in the United States. In 1975 it was listed on the registry of historic trees. It has been listed on the National Register of Historic Places since 2000. DEC has consulted with the NYS Office of Parks, Recreation and Historic Preservation on the tree’s condition and removal and took photographs.

DEC has been actively maintaining the tree since 1976. At that time, DEC acquired a permanent easement from surrounding landowners for the preservation and maintenance of the tree and adopted regulations designating the tree as a protected plant pursuant to Section 9-1503 of the Environmental Conservation Law (ECL).

In 1995, DEC installed an elaborate steel mast and guy wire system to help support and prolong the life of the tree. Pruning and other measures have been undertaken as well. According to DEC, recent assessments of the tree indicated that the trunk and most remaining branches were hollow.

You can watch video of the tree coming down here.

Photo: Above, a still image from a video of the Balmville Tree being cut down posted by Time Herald Record; and below, a recent photo of Balmville Tree, with guy-wires visible (courtesy Wikipedia user Daniel Case).