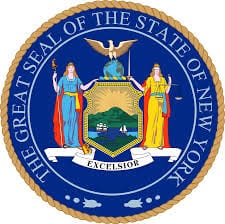 State Historians’ job descriptions and priorities have varied over the years as well. The first State Historian, Hugh Hastings (1895-1907), had been a New York Times reporter and concentrated on documentary publications. The next one, Victor Hugo Paltsits (1907-1911), a librarian and expert in colonial history, was known for meticulous editing of published editions and laid the basis for expanding the position into the area of archives. Alexander C. Flick (1923-1939) edited and led the publication of a multi-volume history of the state. Louis L. Tucker (1966-1976) held the titles of State Historian and Assistant Commissioner for State History in the Office of State History and, in the early 1970’s, was also Executive Director of the New York State American Revolution Bicentennial Commission.

Bob Weible was appointed to the position in 2008 after it had been vacant for several years. His tenure included strong support for the annual state history conferences and New York State History Month, designing an award-winning exhibit in the State Museum on the Civil War entitled An Irrepressible Conflict and co-authorship of a new book with the same title based on the exhibit. Bob’s retirement was reported in John Warren’s July 8 post, “State Historian Bob Weible Stepping Down.”

The current position description on the State Museum’s website:

The State Historian advises state officials on historical matters and provides statewide leadership to promote education about, public understanding of, access to, and practical use of New York State history. He/she creates and manages partnerships among 1,650 municipal and county historians; affiliates of universities, museums, historic sites, and other historical and cultural institutions; educators and students at every level; and anyone else interested in New York State history. The current State Historian also serves as Chief Curator of the New York State Museum and, as such, directs a professional and administrative staff to conduct professional historical research, share research findings with professional and public audiences, manage history collections, and plan and develop historical exhibitions.

That is a broad set of responsibilities, combining work that formerly was allocated to two senior positions. The first part is about leadership of the state’s historical community; the second, about leadership and direction in the Museum. They are both very important. But as a search begins for a new Historian to succeed Bob, it may be timely to consider separating them into two positions, designating a State Historian to provide full-time statewide leadership.

New York has some of the best historical programs in the nation. According to figures compiled a few years ago, our state had approximately 532 chartered historical societies, 149 historical museums, 48 historic preservation organizations, 94 historic house museums, 37 state historic sites, 20 heritage areas, several “historical trails” and hundreds of libraries with historical collections. New York is the only state in the nation with officially appointed local government historians at the county, city, town, and village level. There are over 1,600 of these official local government historians in New York State. 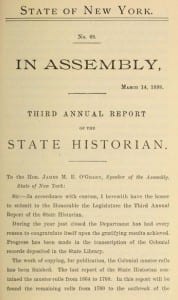 Its historical community, broadly defined, is robust, energetic and creative. It faces a number of challenges, but also opportunities, that strong leadership from the State Historian could help confront. Officially designated local government historians need more guidance and recognition and support in their communities. Many historical societies and other history programs need strategic planning and assistance in setting priorities to secure adequate resources and carry out their work. More cooperation and coordination among these programs would be beneficial. There are needs and great opportunities in development of digital history collections and the use of the web and social media to engage new audiences, particularly young people. This New York History Blog is an excellent example of the power of online forums. More coordination would be helpful among state government history programs, including the state historic preservation office in the Office of Parks, Recreation, and Historic Preservation and the Governor’s Path Through History heritage travel program. We need to strengthen the coverage of New York state and local history in the schools. More extensive connections between the state’s history community and social studies and history teachers would assist in that area.

New York is arguably the nation’s historically most significant state, but its historical importance is often overshadowed by the promotional efforts of other states. More attention to state history would strengthen public pride in our state, make connections with young people, and elevate historical precedents and parallels which would help inform public discussion of current issues.

The responsibilities of the next State Historian will depend on several factors, including policies and priorities of the Regents, the State Education Department and the State Museum, resources, and staffing levels. But expectations from the state’s historical community should be a factor in how the position is defined. For instance, depending on staffing availability, resources, and support, and cooperation from the state’s history community, the State Historian might lead or carry out some or all of the following:

Of course, all of that would depend on cooperation from the state’s historical community. As Bob Weible wrote last year in a post on this New York History Blog on State History month, “Together we share an important public service mission, and together we can promote better history education among classroom and adult audiences, elevate the quality of life in our communities, and help develop the state’s economy. Let’s keep on doing it.”

Some sources for more information:

* Description of the State Historian’s position on the State Museum’s website: http://www.nysm.nysed.gov/services/srvstate.html

*Analysis of issues, challenges and opportunities facing New York’s historical community: Strengthening the Management of State History: Issues, Perspectives, and Challenges From New York. Special issue of The Public Historian, the journal of the National Council on Public History. Vol. 33, No. 3. August 2011. Summarized in a December 14, 2011 post on this New York History Blog.

Photos: Above, the Great Seal of the State of New York; and below, the first page of the State Historian’s third annual report to the state legislature (1897).