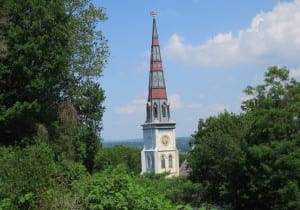 A walking tour of The Rondout-West Strand National Historic District in Kingston, sponsored monthly by Friends of Historic Kingston, contrasts the results of a heartbreaking 1960’s urban renewal project with the gentrification that followed in an area that escaped the wrecking ball.

After the entire east side of Lower Broadway was demolished in 1967 vintage 19th century buildings on the opposite side stood empty, awaiting what seemed their inevitable fate. Luckily, federal funding ran out and what is today the Rondout – West Strand National Historic District was spared. New structures were built part-way up the east side of the hill. The restored neighborhood brings to my mind the painful image of a one-winged bird.

The Way It Was

The demolition included Nate Armstrong’s tavern, where civil rights meetings were held upstairs. I was there in 1964 when CORE founder James Farmer came to one of our meetings. He stayed for dinner in the kitchen with Nate and his brothers. Today a modest curbside memorial of bricks, plants, and a young fruit tree mark the overgrown lot, now empty, where the happiest times of my young adulthood occurred.

After the CORE meetings (and on weekends when there was no meeting) many of us socialized and danced. All age groups and genders, families (after church) and cultures intermingled. The jukebox was so full of quarters it could take no more and the music never stopped. Underpinning the good times was a shared enthusiasm for social justice. The bartender, George “Butch” Armstrong, summed it up recently: “We were non-denominational.” 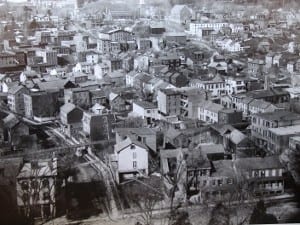 Armstrong’s was just one of many small businesses eliminated by urban renewal. The eviction of this functioning, interracial community in the 1960s was followed by cobblestone removal, road widening, the addition of a median, and the moving of the Kingston City offices and Police Department to a side street enlarged and re-named in honor of the Mayor. Low cost housing projects sprang up not far from the Police Department.

There was little public resistance to the federal urban renewal project before it happened, except for an outspoken Kingston Alderman, the late Lenny Van Dyke. On a recent cemetery tour where a Van Dyke family grave attracted notice, Reverend James Childs told me, “The way it was presented to us, we thought urban renewal was a good thing. Only Lenny said it would displace a neighborhood. We found out that the displaced neighborhood was us!”

The original historic 19th century village as a whole and the warm community of working class people who lived there in the 20th century was lost, but the collective trauma of mass demolition motivated Kingston residents to organize. Friends of Historic Kingston and the Kingston Land Trust were formed. In 1974, Rondout was named to the New York State and National Registers of Historic Places. 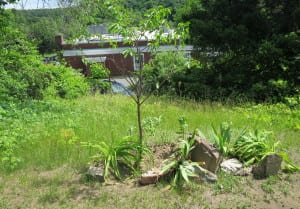 Gradually many of the remaining 19th century buildings were purchased by private owners, spruced up and occupied by restaurants, art galleries, antique shops and boutiques that border elegantly refurbished houses. A waterfront park and the Maritime and Trolley Museums opened. The Artists’ Soap Box Derby, ethnic festivals, musical events and marinas attract tourists. Old buildings on Broadway are mixed use, meaning there are storefronts downstairs and apartments upstairs. Based on the historic value of the buildings that escaped urban renewal, the neighborhood reflects the architectural vernacular of the 19th century maritime village it once was, and it is a commercial success. It is this area of private homes, small businesses, and re-purposed historic buildings that I recently explored on foot. Patricia Murphy was our well-informed and indefatigable guide on the tour, which is sponsored once a month by Friends of Historic Kingston.

Two hours climbing the steep hills of Rondout is a gratifying and calorie burning effort. It brings to mind the hard labor that created the Delaware and Hudson Canal, the 108-mile-long, 4-foot-deep, 18-foot-wide barge channel that was built to haul coal from Pennsylvania to Rondout for reshipment to New York City. My great great grandmother purchased and operated a canal boat based in Summitville. Completed in 1828, the canal brought a huge boom to Rondout and wealth to neighboring Kingston, settled by the Dutch in 1658 and located two miles north.

Construction of the D&H Canal brought thousands of laborers, largely immigrants, to the valley of the Rondout Creek, the Neversink, Delaware, and Lackawaxen Rivers to build the canal that ran generally parallel to present day Route 209. Rondout, the terminus of the canal at the mouth of the Hudson, was a rowdy village that reached its zenith in 1870, when 3 million tons of coal reached its initial destination here. Canal workers labored six days a week for 75 cents a day and partied on the seventh at the many taverns that lined the street now known as Lower Broadway.

According to informative literature written by our guide Patrica Murphy, and printed by Friends of Historic Kingston, Rondout incorporated as a village in 1849. By 1855 Rondout had surpassed Kingston, the “First Capital” of New York State, in population. Rondout petitioned Albany to designate it a city, but Kingston officials, alarmed at the prospect of being absorbed by their gritty neighbors, presented a counter-proposal that resulted in the incorporation of the two villages as the City of Kingston on May 29, 1872.

Our walking tour starts on the breezy, sunny waterfront, where Murphy described the history of Rondout as one of only three deep water ports along the length of the Hudson River. It was a center of trade for Native Americans long before Henry Hudson’s 1609 voyage. Dutch sloops that plied the Hudson for trade with New Netherland docked at Rondout. British troops landed at nearby Kingston Point in 1777 on their way to burn Kingston, an objective they achieved. (The Dutch rebuilt their stockade village, however, and guided tours are offered in that historic district once a month through October. Reenactments of the British attack are held every few years.)

Our guide leads us up Company Hill, a steep gravel path from the West Strand to the site of the main office where employees picked up their pay checks once a week while officials monitored activity on the loading docks below. The three-story bluestone office building was demolished in 1938. The building that replaced it is being restored and will be “re-purposed,” by private developers, possibly as office space, Murphy says. The path and a stone wall were restored by Friends of Historic Kingston in the mid-1980s.

The path leads around the site to Abeel Street, where the former Temple Emanuel stands in disrepair. The congregation moved to Albany Avenue in 1958. During the mid-1990s, a large circular stained glass window featuring a Star of David was moved to the new synagogue, but two tablets of the law are still visible in the facade. The Abeel Street structure was sold and used briefly as a night club, an enterprise that didn’t succeed. The former temple’s future is uncertain, according to Murphy, but Kingston’s preservation community is active, effective, and alert. The former temple may be re-purposed as condominiums, according to Murphy. 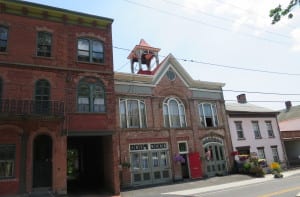 We move on to Rondout’s first firehouse, now in use as an artist’s studio and flower shop, and chat with the enthusiastic proprietor. Then Murphy leads us up Wurts Street. The history of the town can be told through the denominations of the many churches here, and Murphy tells it well. While the waterfront was a rough and tumble environment, the Victorian mansions, parks and houses on the hill above were palatial, and there were almost as many churches on the hill as there were brothels on the waterfront.

Thomas Cornell, whose steamship company grew from a single sloop to the largest shipping business on the Hudson River, arrived in 1837. Cornell’s home on Wurts Street no longer exists, but his elaborate carriage house remains next to Cornell Park, a landscaped oasis opposite a row of churches. The steeple of a former Methodist church bears a replica of Cornell’s famous steamship, Mary Powell, in the form of a weather vane crafted by Paul Joffe and precariously installed in 2006 by a professional steeplejack. (Think Henrik Ibsen’s play, “The Master Builder”.)

Cornell’s son in law, Samuel Coykendall, inherited a financial empire and created Kingston Point Park, designed by Downing Vaux, which was known throughout the northeast for its landscaping and amusements. The Hudson River Dayliner docked there to unload passengers who would travel on to summer resorts. I heard about it from my father, born in 1908, who had the good fortune as a boy to travel the Hudson River Day Line from Yonkers to Kingston Point, and then on to Ellenville by train every summer. He could name the entire fleet.

The beauty and excitement of the place is detectable in remaining fragments of landscaping preserved at Rotary Park and in vintage postcards. There is also a public beach on the Hudson at Kingston Point. 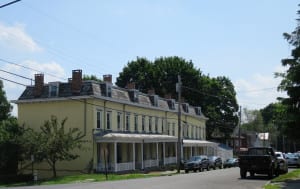 We pass Tubby Row on Spring Street, distinctive mansard-roofed housing for workers that still serves its purpose today. “Just a quick jog around President’s Place,” Murphy cajoled, as the afternoon grew warmer. It was worth it. Beautiful houses high on a hill are secluded within a leafy landscape. The Mary Power church steeple rises from below and pierces the horizon.

On the way back downhill to the start of our tour at the Visitor’s Center on Broadway, we pass the Mansion House, which was a hotel during the Canal days, the former Sampson Opera House, and numerous beautiful buildings that deserve personal observation. The architects were well-known in their time.

The whole region along the D&H towpath benefited from the Canal, as industries developed and commodities including bluestone, cement, lumber and agricultural items were transported until the railroads took over in 1898. Today the Canal’s drained and overgrown route is a lazy towpath through history, located out of the way between the Shawangunk and Catskill Mountains. Scenic country roads lead to several Canal Museums, notably in High Falls, Cuddebackville and interspersed along Route 209.

Our tour was one of several explorations of historic Kingston that happen monthly. Tours of Rondout–West Strand depart from the downtown Visitors Center on Lower Broadway at 1 pm on the last Saturday of the month. Tours of the Kingston Stockade District start at 1 pm on the first Saturday of the month. Stockade tours start at Friends of Historic Kingston’s headquarters on the corner of Wall and Main Streets. Call 846-339-0720 or see www.fohk.org for directions and more information.

Photo from above, by Olivia Twine: The steeple of a church on Wurt’s Street (with steamboat weather vane) seen from President’s Place; Rondout circa 1888; The memorial to Nate Armstrong’s tavern on Lower Broadway with Police Station behind; Rondout’s First Firehouse, re-purposed as an art gallery and flower shop; and Tubby Row, an early housing project, still in use.

Rhoads, William B., Kingston, New York, the Architectural History and Guide; Black Dome Press in association with Friends of HistoricKingston, 2003.