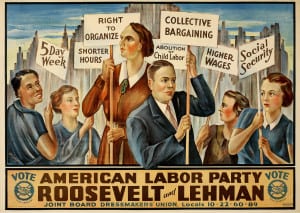 This summer, the New-York Historical Society is presenting 72 posters dating from the early 1930s through the 1970s in Art as Activism: Graphic Art from the Merrill C. Berman Collection, on through September 13, 2015.

“These seemingly ephemeral activist artifacts are of tremendous historical and artistic importance, with deep roots in the past and a lasting influence,” said Dr. Louise Mirrer, President and CEO of the New-York Historical Society. “Merrill Berman’s collection rivals the graphic design holdings of the Museum of Modern Art in New York and the Stedelijk Museum in Amsterdam, and we are thrilled to be able to share some highlights with the public this summer.“

Art as Activism presents a wide selection of posters addressing movements that arose in reaction to the Great Depression, World War II, racial inequality, the Vietnam War, and environmental concerns. Featured posters include works by artists such as Emory Douglas, Hugo Gellert, James Rosenquist and Tomi Ungerer, as well as numerous unidentified designers.

“Art as Activism will showcase imagery that served as the wallpaper of public discontent,” said New-York Historical’s Chief Curator Stephen Edidin. “Posters shaped the visual language of protest for generations, “going viral” decades before the term was born, until they were replaced by other forms of social media, including street art and ultimately the Internet.”

Featuring three main sections, Art as Activism opens with works dating from the Great Depression to World War II, with themes that include electoral politics, workers’ marches and the political, social, and economic inequalities endured by African Americans. Featured works include a poster for Langston Hughes’ political play Don’t You Want to be Free?: From Slavery Through the Blues to Now – and then some! (1938), with bright red and yellow graphics of a whip in a raised fist. A colorful 1941 poster Cross Out Slums promoted the U.S. Housing Authority, which cleared slums and built new low-income housing. Using photomontage and European modernist design, graphic artist Lester Beall shows a bucolic neighborhood in the form of a hand, crossing out substandard accommodations with a large “X.”

The second section of the exhibition explores the Black Panther movement, beginning with its founding in California in 1966 and tracing its rise to national prominence. The Panthers’ leadership used posters and the press to spread their message, leveraging advertising techniques and celebrity culture to compose and disseminate powerful imagery. One of the most defining photographs of this era is the iconic image Huey Newton seated in a wicker chair (1967), featuring the Panthers’ Minister of Defense enthroned in a wicker chair, holding a rife and a spear. Another highlight is the poster An Attack Against One is An Attack Against All, The Slaughter of Black People Must be Stopped by Any Means Necessary! (circa 1970), featuring the image of a black panther with massive claws and a sinuous body, poised to attack.

The final section of Art as Activism focuses on the anti-Vietnam War movement and other protest movements of the era, such as the American Indian movement and the nascent Environmentalist effort. To cut costs and distribute the message by any means available, activists printed posters on computer paper. In 1970, U.C. Berkeley students protested President Nixon’s bombing of Cambodia with the poster Amerika is Devouring Its Children, making a powerful anti-war statement by appropriating Francisco Goya’s terrifying image of the god Saturn fiendishly eating his own son. Another highlight on view is a poster from the 1975 Central Park rally celebrating the end of the Vietnam War, featuring a photograph of a Hanoi circus performer with doves balanced on her outstretched arms, offering an uplifting image and global message.

On July 17 at 7 pm, the New-York Historical Society will present “Singing for Our Lives: The Music of Protest”, a concert by the vocal group Just Friends featuring protest songs from the 1960s and 1970s as well as select pieces from the 1930s and 1940s. The program will be introduced by Brent Staples, a writer for The New York Times editorial board. Entrance to the concert is included with Museum admission during New-York Historical’s pay-as-you-wish Friday Nights (6–8pm). To reserve a seat for this event please call (212) 485-9268.

Since its inception in 1989, the vocal group Just Friends (Shelton Becton, Gail Blanche-Gill, A. Makea McDonald, Nedra Olds-Neal, and Teresa Bowers Parker) has cultivated an enthusiastic following in the New York area. They have performed with the Dance Theater of Harlem, Alice Parker and Melodious Accord, and the Canadian Brass and have appeared on HBO, as well as at the New-York Historical Society and Riverside Church. Noted for their interpretation of vocal music, Just Friends has a unique blend of voices with each vocalist bringing a broad range of experiences to each part.