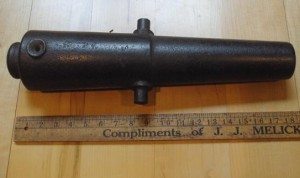 Vincent Schaefer had the cannon dated at the Watervliet Arsenal and it was determined that it was a swivel gun of the type probably used by Benedict Arnold’s troops during the battle of Valcour Island.

Another version of the story has the cannon being discovered by the town highway crew in the late 1950s or early 1960s on an old section of the Bartman Road near NYS Route 8 in Bakers Mills. It was said to have rolled out of a sandbank as the crew was widening the road. Adding some authenticity to the second story is that near Bartman Road is a trail on Eleventh Mountain called “The Old Military Road”.

Unfortunately, at the time of its discovery the exact location where it was found was never documented. The cannon is in private hands.

The cannon measures 18 inches long, 4 inches in diameter at the large end of the taper, and has a bore of 1 inch. It was found in perfect condition and appears to be a naval cannon of the type often mounted on the bow of a small warship. These were also used on land expeditions during the French & Indian Wars and during the American Revolution. It may have been used by Sir Johnson and his Loyalist troops in 1780. 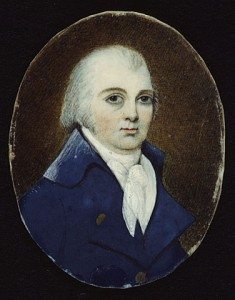 When the Revolutionary War broke out Sir John Johnson of Johnstown remained loyal to the Crown; many of his neighbors did not. Johnson began fortifying his estate and building an arsenal of arms at Johnson Hall.

To address the threat, General Philip Schuyler of Albany led 3,000 armed patriots to disarm Johnson and 700 of his loyalist followers. Once Schuyler’s men withdrew, Johnson again began to stockpile arms. A regiment of Continental troops was then dispatched to arrest him. He fled north to Canada and there organized a regiment of fellow Loyalists, the King’s Regiment of New York, to fight against the rebels.

Arthur Pound’s 1930 classic Johnson and the Mohawks includes a sketch of the purported route Sir John Johnson used in May of 1780 when he led a detachment of 400 soldiers from the Royal New Yorkers and 200 Algonquian warriors down from Canada to raid the settlement of Johnstown on the Mohawk River, his former hometown. 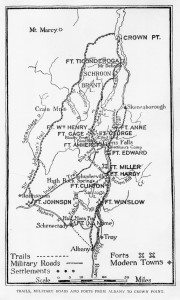 According to Pound’s sketch and research by Vincent Schaefer, the trail Sir John Johnson used to attack Johnstown went from Bulwagga Bay on Lake Champlain, down the Schroon River to Schroon Lake, crossed the Hudson River at Riparius and then on to near Crane Mountain in northwest Warren County. It then headed south to Baldwin’s Spring, long known for its plentiful supply of good water. Next East Stony Creek, to Harrisburg, to Sand Lake and then the military road to Northville and, ultimately, Johnson Hall.

When Sir John Johnson and his men reached Johnstown they rescued 143 persecuted Loyalists and then went on a rampage burning 120 barns, mills and houses of those former neighbors who supported the rebel cause. They also destroyed any stores and provisions essential to the rebel cause including a large wheat crop potentially destined to feed Washington’s Continental Army.

We tend to forget that the American Revolution was a civil war, especially in New York. New York’s population was equally divided between those that wished to remain English citizens and those who were rebelling.

There is also speculation that Sir William Johnson, Sir John Johnson’s father, acting as Colonel of the New York Colonial Militia during the French and Indian War 25 years earlier, may have used this same route through the Adirondack wilderness when he and his men were ordered north to harass and alarm the French settlements along Lake Champlain.

Both of these versions of the story regarding the origin of the canon were shared in my book Echoes in These Mountains (2008). Since that publication, new evidence of where the cannon may have been found has been unearthed. 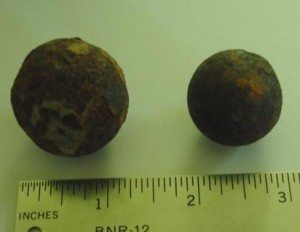 Recently a local resident shared with me two round iron balls he uncovered while working in his garden. They measure 1.26” and 1.062” in diameter and were found in the late 1980s near Bartman Road in Bakers Mills, Township of Johnsburg. Although they do not fit in the barrel of the found cannon, they appear of that era and might have been used in a naval swivel gun, possibly also from Sir John Johnson’s raid of May 1780 or his second raid in October of 1781.

Unfortunately we will probably never be able to document the exact route of the old military trail from Bulwagga Bay on Lake Champlain, then by Crane Mountain, to Johnson Hall nor have a documented provenance on the old cannon found near Crane Mountain years ago.

But, as we celebrate the 4th of July on Saturday, we might wish to contemplate what it was like to have war parties traversing through the heart of this dark and foreboding wilderness more than 235 years ago amidst the terror and chaos of the American Revolution.

Photos, from above: The cannon found in Johnsburg; a portrait of Sir John Johnson; the map included in Arthur Pound’s Johnson and the Mohawks; and the cannon balls found in a Johnsburg garden in the 1980s.