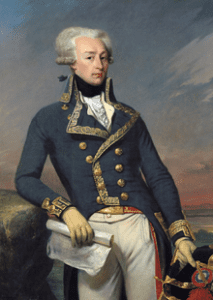 If you visit Schoharie Crossing State Historic Site in Fort Hunter, you will be following in the footsteps of Marquis de Lafayette, who visited by canal boat in 1825.

A French aristocrat, Lafayette fought with George Washington’s army during the American Revolution. At some point while in America the Frenchman visited Johnstown and was entertained by the families of Jacob and Thomas Sammons, who leased the former Johnson Hall for four years after the Loyalist Johnson family fled to Canada. Lafayette played a key role in the British defeat at Yorktown, Virginia in 1781.

In 1824 President James Monroe invited Lafayette to tour the United States. In 1825 the Marquis was traveling east on the new Erie Canal through the Mohawk Valley.

Thomas Sammons and his son Simeon at the time were traveling west by canal boat from Albany. When they arrived in Schenectady, the town was festooned with flags, flowers and evergreens as Lafayette was expected to arrive that day. However, word came that Lafayette would not get to Schenectady until the next day.

Sammons proceeded west on the canal, expecting to meet Lafayette in Fultonville. When the Sammons boat came to Fort Hunter, where the canal crossed the Schoharie Creek, Lafayette’s vessel approached from the other direction.

One historian had this account, “Mr. Sammons’ boat was at the crossing when the packet conveying the illustrious Frenchman bore down upon it, decked with streamers and evergreens, even the harness of the horses bristling with flags. A jubilant crowd upon the tow-path, horseback and on foot, kept abreast of the coming boat. Sammons was exhorted to hurry across the creek and out of the way, that there might be no unnecessary delay to the progress of nobility. He, seeing his opportunity, hastened to comply, and landing with his son, came back to the towing bridge from which he was able to board the packet as it arrived.”

The Marquis was reclining on a couch but recognized his old friend Sammons. Sammons and Lafayette had a brief reunion, extended when Lafayette ordered the boat be held there for a time, against the wishes of its captain.

The historian reported, “Mr. Sammons stepped ashore, as may well be supposed, a proud and happy man, and his son a proud and happy boy, no doubt, or he would never have told the story with such readiness and spirit when on the downhill side of life.”

The boy, Simeon Sammons, grew up to be the commander of the 115th New York State Volunteer Regiment in the Civil War. Sammons was wounded in the foot at the Confederate victory at Olustee, Florida in 1864. He recovered but was wounded again when the regiment fought at the Crater in Petersburg, Virginia. He then returned to Fonda and later was elected to the State Legislature.

At an advanced age, Sammons recounted how he and his father met Lafayette at Fort Hunter. The account was printed in Illustrated History of Montgomery & Fulton Counties, New York, 1772-1838 published by F.W. Beers and Company in 1878.

Illustration: Lafayette as a lieutenant general, in 1791. Portrait by Joseph-Désiré Court.

A version of this post first appeared in the Schenectady Gazette.