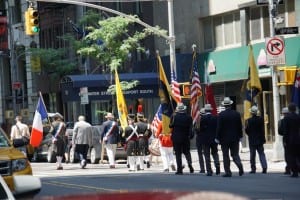 The parade included marchers from patriotic groups such as the New York Veteran Corps of the Artillery, the Sons of the Revolution of the State of New York Color Guard,, the Color guard of various chapters of the Sons of the American Revolution, the Colonial Dames of America, the French Air Force Reserves, the Chinatown partnership, and native New Yorkers.

The parade, which also honored the French ship Hermione and its crew, which is docked at South Street Seaport’s Pier 15, was led by Grand Marshal Miles Young, chair of the American Friends of the Hermione, Adam LeClerk in period costume representing the crew of the Hermione. The parade was principally organized by Arthur Piccolo, a co-founder of the LMHS, and received financial support from the Howard Hughes corporation, developer of the South Street Seaport.

At the start of the parade, as LMHS President, I recalled John Adams’s belief, stated in 1776, that July 4th would be celebrated with pomp and parades from one end of the continent to the other forever more. Unfortunately, for the past forty years in the most historic area of the nation’s largest city there had been no such festivities. Rather, the only major July 4th public event in recent years has been the Nathan’s hotdog eating contest in Coney Island.

Manahttan Borough President Gale Brewer, a great supporter of the LMHS’s activities and the promotion of Lower Manhattan history, spoke. Then Jonathan Boulware, the recently elected President of the South Street Seaport Museum, spoke about his plans to revitalize the museum and return to its piers the glory days of the Bicentennial in 1976, when the Tall Ships festival and its more than 20 square rigger sailing ships came to New York and led the City out of its economic and psychological doldrums of the mid-1970s. He noted that at the time the South Street Seaport Museum had more than 25,000 members (more than any other in New York City) and he hoped with a regular program of visiting ships and other activities to return it to that level.

The parade ended at the flagpoles at Bowling Green where I spoke about Evacuation Day, November 25, 1783, the last day of the American Revolution. On that day, John van Arsdale, a young soldier, climbed up the greased flagpole to pull down the British flag and put up the American Stars and Stripes, paving the way for George Washington’s triumphant return to the City. Several additional speakers, including Abmrose Richardson, President of the Sons of the Revolution of the State of New York (which owns Fraunces Tavern); Wes Oler, Chairman of the First New York chapter of the Sons of the American Revolution; Frederick Vigeroux, a colonel in the French air forces reserves; and Frederick Cookinham, a local history guide, elaborated on the history of the parade route.

Story teller Jonathan Kruk, who told a story about the first reading of the Declaration of Independence New Yorkers on July 9, 1776 in what is now City Hall Park. A crowd of angry New Yorkers raced down Broadway and there at Bowling Green on that very spot tore down a statute of King George that had been erected in his honor after the repeal of the Stamp Act seven years earlier. The lead from the statute was then taken up to Litchfield, Connecticut where it was used to make bullets for the Continental Army. At the end of the ceremony, the American and French flags were raised on the Bowling Green flagpoles, as the crowd sung the Marseillese and Star Spangled Banner.