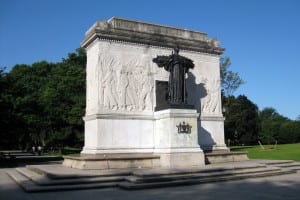 During the four years of the Civil War, New York would send 474,000 men, 1/8 of New York’s entire population, to comprise 1/5 of the Union Army. Ten regiments and one artillery battery would be raised in Albany County and Albany troops would play major roles and take casualties at almost every major battle of the Civil War.

Albany’s 25th Regiment under Col. Michael K. Bryan was one of the first to report to defend Washington. They built and manned Fort Albany and guarded the Union withdrawal after the Battle of Bull Run. In 1862, they were assigned to General Max Weber but were mustered out prior to the battle at Antietam. Col. Bryan was later killed leading his troops in the Battle of Port Hudson, Louisiana in May, 1863.

Albany’s 43rd Regiment contained 5 companies known as the “Albany Rifles,” 2 companies from NYC, one each from Montgomery County, Washington County and Otsego County. They started the war under Col. Francis L. Vinton with 706 men in September 1861. The 43rd fought at the siege of Yorktown, Lee’s Mill, Williamsburg, and the Seven Days’ Battle losing 71 killed, wounded and missing. The 43rd took part in the battle of Antietam, Chancellorsville, lost 138 men at Salem Church and 66 in an assault on Marye’s Heights and Deep Run. Additional companies and recruits were added periodically. 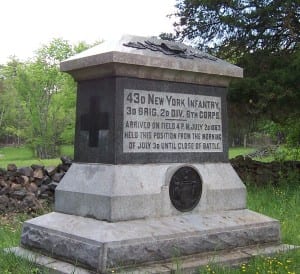 They rushed to Gettysburg arriving on June 2, 1863 and fought on June 3. In the autumn of 1863, the 43rd fought at Rappahannock Station, Locust Grove, Auburn, and Mine Run. However, for the 43rd, the worst was yet to come – in the Battle of the Wilderness they lost 198 soldiers.

Now down to 7 officers and 92 men, the 43rd fought at Spottsylvania, North Anna, Totoptomy Creek and Cold Harbor. They were in the first wave of attackers in the Assault on Petersburg. They were rushed to Washington and repulsed the enemy at the attack on Port Stevens where Col. Vissher and 5 enlisted men were killed and 29 wounded.

They participated in the campaign in the Shenandoah Valley where they engaged the enemy at Charlestown, Opequan, Fisher’s Hill, and Cedar Creek. They participated in one final assault at Sailor’s Creek and were present at Appomattox to witness Lee’s Surrender.

Albany’s 44th (People’s Regiment or Ellsworth Brigade) raised at Albany in Sept. 1861, contained two Albany companies, two from Erie County and one from Herkimer County together with many scattered squads reporting to Albany. The 44th left on October 21, 1861 with 1061 men under Cols. Stephen W. Stryker, James Clay Rice and Freeman Conner. They lost 1 dead and 2 wounded at the Siege of Yorktown and then 85 killed or wounded at Hanover Court House, 54 more casualties at Gaines’ Mill, 100 at Malvern Hill, 71 at Bull Run, and 49 at Shepardstown. With 362 casualties, a call went back to Albany to recruit and send more troops.

Two new companies, totaling 700 new recruits, left for war in October, 1862. One of these new companies was the ROTC class from the Albany Normal School, a college for teachers in Albany. The Albany Normal School later became the Albany State Teacher’s College and later State University of New York, Albany. Professors Kimball and Husted became Captain Kimball and Lieut. Husted and commanded the company. 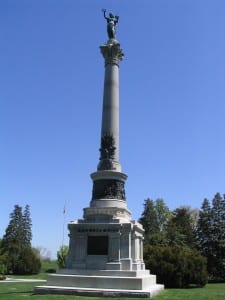 The Albany 44th, now commanded by Col. James Clay Rice, was stationed next to Col. Joshua Chamberlain and the 20th Maine on Little Round Top at the end of the Union line at Gettysburg, the main target of the Confederate army’s attack on the second day. Their brigade commander, Col. Strong Vincent, was killed only minutes into the battle causing command of the defense of the critical Little Round Top to fall to Col. James Clay Rice. The 44th lost 111 casualties that day.

They later fought at Bristol Station, Rappahannock Station and Mine Run. In 1864 they fought at The Wilderness Campaign and Bethesda Church, later at Petersburg, Weldon Railroad, and Poplar Spring Church. On Oct. 11, 1864 the 44th was mustered out at Albany.

They would suffer a total of 730 casualties from their peak enlistment of 1,585 before they were mustered out in Albany in June, 1863.

The 113th suffered 24 killed, 71 wounded and 12 missing at the 1st engagement at Cold Harbor. At the second engagement they penetrated the Confederate defenses, seized a Confederate battle flag and took 300 prisoners, as well as several artillery pieces, at the cost of 76 killed, 248 wounded and 116 missing inside enemy territory.

At Petersburg, they led an unsuccessful charge, losing 35 killed, 105 wounded and 304 taken prisoner. After Petersburg, their regiment, originally 66 officers and 774 men who had departed Albany, was reduced to 6 officers and 168 men, 677 had been killed, many more wounded. Of these, 4 officers and 213 enlisted men died in captivity in southern prisons.

Albany’s 11th “Flying” Havelock Battery was raised after a call for recruits was made at the Albany Young Men’s Christian Association. Reverend A. A. Von Puttkammer, pastor of Albany’s German Baptist Church was elected captain. Von Puttkammer would admit none but “men of Christ character into his command and proposes to observe worship three times a day when practicable” according to an interview he gave to the Cincinnati Gazette. 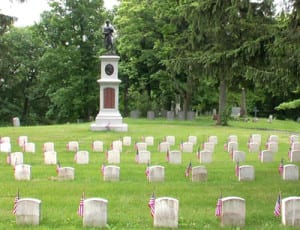 Albany’s 10th, renamed the 177th New York Volunteer Infantry, lost 161 men but only 9 in battle. The other 152 deaths resulted from disease in the swamps of Louisiana.

Albany’s 91st under Brigadier General J. M. Brannan was transferred to Key West, Florida, and then Pensacola, Florida, before joining General Nathaniel Banks in New Orleans. They fought at Irish Bend, Bayou Vermillion, Port Hudson and later Donaldsville suffering 165 casualties. Moved back to the northeast, they joined the Army of the Potomac and fought at Petersburg, White Oak Ridge, Five Forks and the Fall of Petersburg.

The 91st lost 395 total casualties. Their biggest losses occurring at Port Hudson where they lost 149 men and Petersburg where they suffered 230 casualties.

The 28th, 34th and 16th NYSV Regiments were also mustered in at Albany but mostly included recruits from surrounding counties.