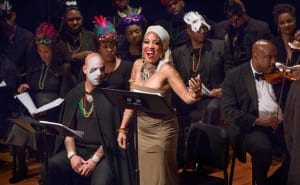 Magic rites in the jungle seal the fate of a love triangle in the long-forgotten opera of H. Lawrence Freeman restaged on Friday and Saturday at Columbia University’s Miller Theatre. Voodoo was composed in 1914 and had its last performance in 1928. The music and libretto come from a composer who was a friend of Scott Joplin. author of more than 20 operas, and founder of the Harlem Renaissance’s Negro Grand Opera Company. The revival features Gregory Hopkins of Harlem Opera Theatre conducting in a production that drew on collaboration with the Harlem Chamber Players and the Morningside Opera.

It was Morningside Opera founder Annie Holt who discovered the opera piano score in the H. Lawrence Freeman papers donated by the family to Columbia University in 2007. The story in those papers is a reminder of the breadth of Freeman’s ambitions, but also his disappointments in an age when breaking into classical music venues was extraordinarily challenging for an African-American. Freeman grew up in Cleveland where he had a chance to imbibe the rich musical culture that Midwestern German immigrants had firmly planted in local institutions. Early in life he became a Wagner fan, but in Voodoo’s music an eclectic mix of American traditions is more prominent than any Teutonic flavors. A quotation from popular cakewalk music was accompanied with projected silent film imagery of soberly attired figures performing the dance. 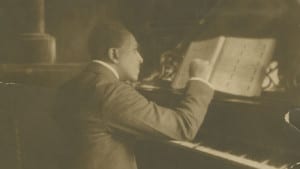 Spirituals sung by chorus and solists Crystal Charles and Darian Worrell who play the parents of the voodoo-seduced Lolo, evoke the post-Civil War setting of a Louisiana plantation. But voodoo clearly wins the musical battle between Christianity and pagan charms. In scenes featuring Lolo as snake goddess, her voice drips with malevolence as the music plays a fascinating riff that travels from the winds to the strings, over an insistent tick, tick, tick rattling on the cymbals. The music plays with expectations, taking a full bar of silence at times, interjecting a few banjo notes, or letting a sax and tuba dominate the orchestral textures. Janina Burnett is a gripping actress who uses her body as well as her voice, with a snarl to her vibrato, and a gaze to transfix even at 200 feet from the stage.

The semi-staged, concert performance featured an introductory slide show that conveyed the atmosphere of Freeman’s early 20th century milieu, with imagery from the score in his very fine hand, old family photographs, and even an advertisement for The Martyr, a Freeman opera produced in 1947 at Carnegie Hall. A family relative, Alberta Zuber sang in that production and at age 88 she was on hand to hear the revival. A two-day Columbia conference on the composer brought together people who have been investigating the work of this neglected artist, and has the potential to spur more productions of his music in the future.

Photos: Above, Barry Robinson as Fojo, the voodoo priest and Janinah Burnett as Lolo, a thwarted lover who resorts to voodoo rites. (Sara Krulwich, NYT); and below, H. Lawrence Freeman.