The renovation is expected to occur over four-years in multiple phases. The Museum will remain open throughout the project, although certain gallery spaces will be closed temporarily while undergoing renovation. The renovation is being funded through a $14 million New York State capital bond. With the master plan complete, the next stage is the exhibition design process.

“The goal of the renovation is to share New York State’s natural, cultural and human history in an integrated, relevant, and memorable way,” an announcement sent to the press stated. “New exhibitions will link to existing exhibitions, such as the World Trade Center exhibition, the Cohoes Mastodon and Native Peoples of New York Hall.”

The new galleries are expected to be developed under a “New York Stories” conceptual approach with “every exhibition telling the stories of the state in a diverse and compelling way.”

The new galleries are expected to address the following themes:

· Politics and Prose: presents New York State as a place of debate, dialogue and documentation.

· Emergence of a State: defines New York State through its people, places and events.

· New York in 100 Objects: an exhibition of 100 objects, including objects borrowed from museums across the state, that represents the history of New York. 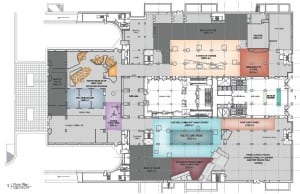 he Museum is encouraging public participation in the renovation project by submitting their suggestions and feedback to museuminfo@nysed.gov.

The full master plan of the renovation project, including artist renderings and floor plans, is available online.