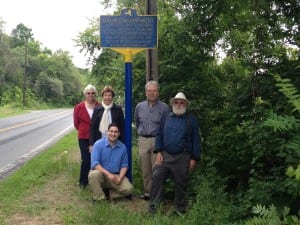 On Monday, a small group gathered for the dedication of a historic marker commemorating the march of Lieutenant Colonel Friedrich Baum to the Battle of Bennington in 1777.

The marker, located on County Route 113 a quarter-mile south of Route 29, identifies the location of German Lieutenant Colonel Friedrich Baum’s encampment on August 11, 1777.

According to diary records, Baum’s troops looked across the river to view the estate of Phillip Schuyler and the first church they had seen since they started their trek from Montreal, nearly three months earlier.  The “Baum Encampment” historic marker is one of two signs funded by the William G. Pomeroy Foundation, marking sites five and six of the Road to the Battle of Bennington interpretive tour.

The tour, from Route 4 in Fort Miller to the Bennington Battlefield State Historic Site, was produced by Lakes to Locks Passage and the Washington County Historical Society with funding from the Historic Hudson-Hoosic Rivers Partnership and Stewart’s Shops.

The print and web materials for the tour can be found on www.lakestolocks.org.