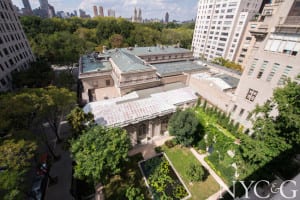 A controversial plan to expand the landmark Frick Collection in New York City was withdrawn by its Board of Trustees on Wednesday. Historic preservationists, including New York City’s Historic Districts Council, opposed the plan, in part on the grounds that the new construction would have destroyed a gated pocket park.

“With the proposed renovation, designed by Davis Brody Bond, the Frick, on East 70th Street in Manhattan, had sought to increase its exhibition space, open private upstairs rooms to the public and offer views of Central Park from a new roof garden,” the New York Times reported.

“But the plan faced strong criticism, much of it from a coalition, Unite to Save the Frick, that includes architects and designers like Robert A..M. Stern and Maya Lin, as well as three former commissioners of the New York City Landmarks Preservation Commission – Roberta Brandes Gratz, Stephen F. Byrns and Beverly Moss Spatt.”

“We are very pleased that the leadership of the Frick Collection has chosen to rethink this move and we look forward to seeing a new proposal,” a statement issued today by the Historic District’s Council said.

Image provided by the Historic Districts Council, courtesy of NYC&G.