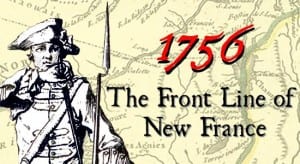 Fort Ticonderoga Museum’s newest exhibit introduces the campaign of 1756 from the French perspective.

Using artifacts, archaeological material, and hands-on reproductions, 1756: The Front Line of New France explores how the soldiers who fought for France’s empire were equipped with the goods created by that empire.

“Fort Ticonderoga’s daily interpretive focus for 2015 recreates life at Fort Carillon (now Fort Ticonderoga) as it unfolded in the year 1756, when the French army were digging and beginning major construction of the fort,” said Matthew Keagle, Fort Ticonderoga’s Curator of Collections. “To equip these soldiers the French government mobilized thousands of people across its empire. Visitors now have the opportunity to witness the French governance of clothing, weaponry, and equipment used by its soldiers in the 1756: Front Line of New France exhibit, and then see the Fort Ticonderoga museum interpretative staff’s highly accurate reproductions in action.”

Fort Ticonderoga holds one of North America’s premier collections of 18th-century military material culture. The exhibits contain thousands of objects and tell thousands of stories, narrating the history of Fort Ticonderoga from the military culture of the 18th century to the reconstruction of the fort in the 20th century. Fully restored in 1931, the South Barracks has been the museum’s primary exhibition space. The building encompasses three stories and nearly 10,000 square feet of gallery space.