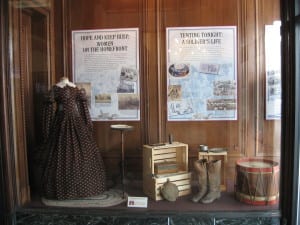 The Chemung County Historical Society has been working with new partners and new programs as part of our effort to be a greater presence in our community. As director, I feel that it is imperative that the museum be a part of everyday community life, analogous to our local library. In order to make a greater impact on our community, we need to find better ways to entice community members to visit our museum and for us to meet our fellow citizens where they are.

Over the past eighteen months, the CCHS has had the opportunity to place new exhibits throughout our community, develop new programming with an unexpected partner and strengthen ties to a traditional partner.

Discussions have taken place at the staff level about finding more places to have CCHS exhibits in our community for some time. This has included talk about the local mall or empty downtown storefronts. When a local building owner approached the CCHS, we jumped at the opportunity. Iszard’s was the downtown department store in Elmira until it closed in the early 1980’s. Since that time the building has been converted to use as office space. The current owner has allowed the CCHS to place exhibits in the old storefront display window. We rotate these exhibits quarterly and have tapped in to past exhibits in order to cut down on time and expense. We have thus been able to re-use professionally printed exhibit panels along with a new mix of items from our collection. The building also has a second smaller window where we display promotional information about the historical society and museum. 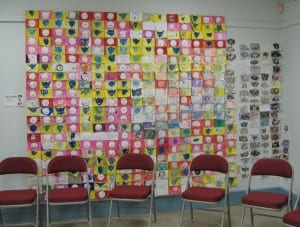 A second opportunity for creating an exhibit in a public space came from another local non-profit. For many years Elmira had a local resident who sold popcorn out of a converted 1929 Chevrolet Truck. In the early 1970’s the truck was sold and left Elmira. In the late 1980’s the Popcorn Truck Preservation Society was formed, purchased the truck, returned it to Elmira and after restoration has continued to sell popcorn at community events throughout the summer. A glass sided building in a downtown park was constructed to store the truck when not in use. Prior to the summer of 2014, the Popcorn Truck Preservation Society approached the museum about putting an exhibit in the building for the summer. The CCHS again tapped in to existing items produced for earlier exhibits as well as producing several new panels. Elmira celebrated its 150th anniversary of becoming a city in 2014 and the exhibit focused on this anniversary and Elmira’s history. A new exhibit is being developed for 2015.

The CCHS has been able to capitalize on its exhibits as a way to build new partnerships and expand old ones as well. Starting in early 2014, the CCHS has maintained an exhibit at our local SPCA building. This exhibit is in the lobby of the building, rotates a few times per year and is focused on the local history of dogs, cats and the SPCA. We also hold two events per year with the SPCA, Catstravaganza in the spring and Dogapalooza in the fall. These events are held at the CCHS and feature animals available for adoption, animal related craft activities, social media components and animal related history exhibits. We also partner with our local school district elementary art teachers to create animal themed drawings which are displayed during the event and for the week after. This past spring, we had over 2,000 pieces of student art hanging in the gallery. Both organizations have been careful in planning these events that the missions of both are met. 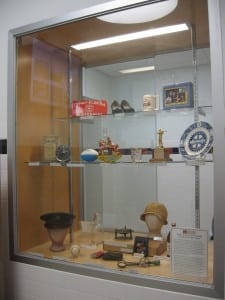 In developing new programming with our local school district, we again added an exhibit component to the program. Our educator did spend considerable time and effort reworking our in classroom education program to meet the new demands of Common Core. This current academic year has focused on one nearby elementary school as a pilot for this program and has gone very well. Museum visits to the classroom have gone up substantially with our educator regularly working with students in kindergarten and second grade. The CCHS is also looking at expanding in to the first grade as the new curriculum has presented an opportunity. We are also looking to expand the program across the district and to other schools outside our home district. The school we are working with has two spaces available for exhibits, one near the school library and one in a more public hallway. The exhibits were developed in conjunction with the school’s curriculum to try and reflect what the students are studying and are changed throughout the school year. The exhibits also serve as a continuous presence in the school for the students, teachers and visitors to see.

These efforts have begun to pay off for the CCHS and our goal of improving awareness in our community. Anecdotally, numerous people have mentioned to staff and Trustees about seeing the exhibits at the various spots around town. We are also averaging 200 people per event for the first three SPCA/CCHS events that we have held. As a comparison, the CCHS averages well under 200 people per week for walk-in visitation. We also know from direct observation that the visitors to the joint events may be coming initially because of their connection to the SPCA, but they are viewing and reading the exhibits in all the galleries. At the schools as well, our exhibits are being seen by parents, support staff and outside groups that use the school as a community resource for meetings or athletics.

We have been able to develop these new exhibits with relatively little additional strain on resources. By using as many pre-existing panels and recycling old exhibits in new ways, we have not had to do any extra fundraising to make the projects happen. Also, by working with a partner, we automatically had an expanded mailing list and social media contacts for the projects we do jointly. We have also found that in the case of the joint SPCA/CCHS events, our two organizations complement each other well in professional skills so that what one organization lacks, the other seems to have. As a result, the third event that was held in the spring of 2015 was planned out in one formal meeting and then needed only occasional e-mails and phone calls to pull together successfully.

The Chemung County Historical Society is excited about the progress thus far. We always envisioned this as an open ended effort and have been willing to experiment and see what works and what doesn’t. As we move forward, we are actively looking for additional spots to expand our exhibit outreach as well as additional partners to work with on new and interesting ideas.

Note: This post is drawn from a recent panel session at the Museum Association of New York Annual Conference held at the Corning Museum of Glass, April 12 to 14. I wish to thank Pamela Davis-Webb, Principal, Diven Elementary School in Elmira, Louise Richardson, Communications and Marketing Manager, Chemung County SPCA and Humane Society and Erin Doane, Curator, Chemung County Historical Society who participated on the panel along with Kelli Huggins, Educator, Chemung County Historical Society, who collectively make these programs happen and successful.

Photos: Above, the window display at Iszards Store; middle, the Student Art at SPCA CCHS event; and below, an exhibit at a local elementary school.

This post is part of The New York History Blog’s Share Your Story series. To contribute a story about what your organization is up to, see our submission guidelines.