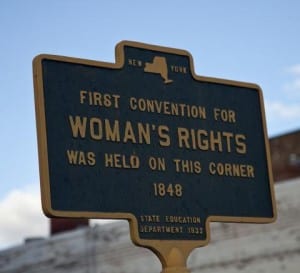 The New York State Senate passed a bill Wednesday that would create a New York State Women’s Suffrage 100th Anniversary Commemoration Commission. The stated purpose of the commission is to promote the 100th anniversary of women’s suffrage, which will take place from 2017 to 2020.

After more than 70 years of demanding the right to vote through activism, women were enfranchised in New York in 1917, and nationally in 1920 following the ratification of the 19th Amendment to the U.S. Constitution.

“The primary focus of the New York state women’s suffrage 100th anniversary commemoration commission will be to plan and execute an organized series of statewide conversations and programs that celebrate the accomplishment of women’s suffrage,” the bill language says.

If the bill passes the Assembly, the commission would consist of 13 members, including eight political appointees, and one non-voting member, but no statewide history organizations, and no representatives of the state’s municipal historians, nor the New York State Historian.

Among the powers and duties outlined for the commission are the planning and execution of “an organized series of conversations surrounding women’s suffrage starting in 2015” and holding lectures “exploring how women have shaped history and continue to form the history of New York state.”

The commission bill does not include funding. A companion bill in the Assembly (A1019) has been read once and referred to the Committee on Governmental Operations.

The full text of the bill can be found here.