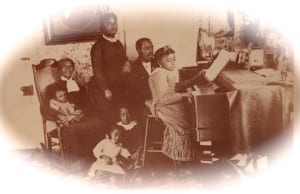 The Rensselaer County Historical Society (RCHS) has opened a new exhibit titled “John Henry & the Baltimores of Troy.” The exhibit is  free and open to the public.

“John Henry & the Baltimores of Troy” features over a dozen 19th century photographs of the Henry family who lived in Whitehall, New York. The photographs were re-discovered a few years ago at the Whitehall Library when Clifford Oliver, a photographer who lives in Greenwich, NY, was alerted to their existence. The photos tell the story of the Henry family who were related by marriage to the prominent abolitionist Baltimore family of Troy, NY. Some of the individuals are identified and others are awaiting further research to connect names to their faces.

The portraits are remarkable in their presentation of a middle-class African-American family who were active in business, church affairs and their community. The finding of these photographs opened a window into research on the Baltimore family and enabled Rensselaer County Historian Kathryn Sheehan to discover in the RCHS archives documents that further the connection between the two families.

The exhibit will be on view through May 16, 2015. The RCHS museum located at 57 Second Street, in downtown Troy, is open Thursday – Saturday, Noon-5pm. Admission is free.

Samuel Baltimore, an African-American, fought during the Revolutionary War as a means to gain his freedom from slavery. After the war, his owner refused to grant his freedom, so Samuel Baltimore freed himself by fleeing to the North.

He arrived in Troy in the late 18th century right when the small village was growing into a major mercantile hub. His house and oyster cellar were located on the corner of Hill and Liberty Streets. He opened a barber shop and ran a successful business for many years.

Samuel married Phebe and had 10 children. He died in 1832. One of his sons, Peter F. Baltimore continued his father’s barber shop. The location, now a parking lot, was close to the intersection of River and First Streets. Baltimore’s barber shop was an important gathering place for individuals associated with the very active Abolitionist and Underground Railroad community in Troy. Peter’s son Garnet D. Baltimore was the first African-American to graduate from RPI and is the landscape architect credited with designing Troy’s Prospect Park.

Peter’s sister Phebe Ann married Anthony Schuyler of Whitehall, NY. It is possible that it was Phebe who introduced her niece Emma, daughter of George & Janet Baltimore, to John Henry of Whitehall. John Henry was also a freedom seeker who during the Civil War left his life of enslavement in Virginia and followed 5th Calvary Officer Major William Boyd to his home in Whitehall, NY where he then became a successful blacksmith. On May 18th, 1867 John Henry married Emma Baltimore. They had five children, of which only two survived. The Henrys appear in the photographs with their children, some of whom appear to have physical deformities.

Emma Baltimore Henry kept a family album which features twenty pages including eighty-nine photographs. Twenty-six of the photographs are of Caucasian friends. The album was donated to the Whitehall Historical Society by Mr. & Mrs. Arthur Brassaw in 1957. It is now kept at the Whitehall Library.