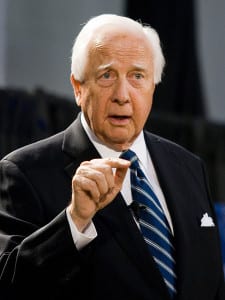 The public is invited to hear McCullough, with prominent Lincoln scholar Harold Holzer moderating, talk about his career as a writer, historian, lecturer and narrator.

Tickets are $15 and can be purchased online at https://tickets.theegg.org/TheatreManager/1/online, by phone at (518) 473-1845, or at The Egg Box Office at the Empire State Plaza. The program will be held at Chancellors Hall located inside the State Education Building at 89 Washington Avenue, Albany, New York (entrance to Chancellors Hall is at the corner of Washington Avenue and Hawk Street).

David McCullough is a twice winner of the Pulitzer Prize, twice winner of the National Book Award, and has received the Presidential Medal of Freedom, the nation’s highest civilian award. His books include The Greater Journey: Americans in Paris, 1776, Truman and John Adams. His next book, The Wright Brothers, will be published on May 5.

McCullough has lectured throughout the United States and abroad, as well as at the White House. He is one of the few private citizens to have spoken before a joint session of Congress. McCullough is also a familiar presence on public television as host of Smithsonian World and The American Experience, and narrator of numerous documentaries, including Ken Burns’ The Civil War.