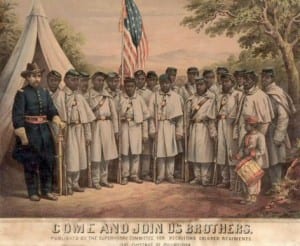 At the time of this interview, Lucas was 88 years old and lived alone at 141 Sheridan Avenue where he proudly displayed his discharge papers. When asked about the war, he said that his memory was not very good, but that he did see action near “City Point and Petersburg… [and] was ordered to take charge of General Lee’s ammunition sheds” after Lee’s surrender at Appomattox. In the years before his death, the city provided a car on Memorial Day for him to participate in the parade in honor of his service.

But a car was not needed in 1934, as Lucas had passed away at home on February 17th. An obituary in the Albany Evening News two days later pointed out that he had organized three Grand Army of the Republic* posts and was a life member of Maj. Lorillard Post. The New York Age on March 3 provided clearer details his life, and on the extensive funeral arrangements.

The Age declared that “for more than fifty years [Lucas was] active in the civic and political life of the Capitol City.” Research shows, for example, that in 1902, he was elected as an officer in the W. A. Jackson Post. In 1910, Lucas was elected as an officer in the Albany County Colored Republican Club.  In 1918, following a patriotic parade and speeches in honor of Albany’s servicemen from the 12th Ward, Lucas was one of two Civil War veterans who raised the rally’s service flag. 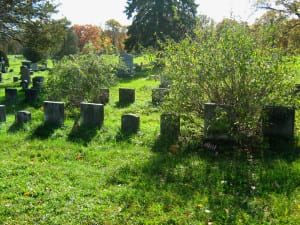 On February 19, Lucas’ “body lay in state” at St. Phillip’s Church. Along with the public, “the children from the Church school marched by to pay their last tribute of respect.” Later, the GAR, and its Women’s Auxillary held separate services.

After the final rights at the church on the 20th, a procession carried Lucas to the Soldiers’ Plot at the Albany Rural Cemetery. Lucas was buried with a volley of gunfire and “full military honors”; a bugler played taps. Citizens of Albany from all walks of life paid their last respects.

This was a fitting end for the long life of a Civil War veteran about whom much remains unclear. His discharge papers say that he was born in Barbados in the British West Indies, but his relocation to America, and his motive(s) for joining the Union Army are unknown at this point. What is clear is that Sergeant Lucas was a rightfully proud and respected person who deserves to be remembered as our Civil War’s sesquicentennial draws to a close.

*The Grand Army of the Republic was a post-Civil War era fraternal organization for Union veterans founded in 1866. It had a color-blind admission policy, although historian Donald R. Shaffer demonstrates in After the Glory: The Struggles of Black Civil War Veterans (2004) that it often was a policy on paper only.