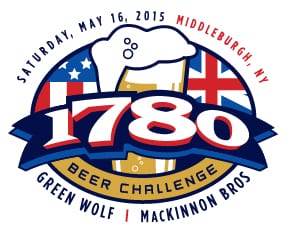 The day’s activities include a Revolutionary War encampment, colonial brewing and cooking demonstrations, 18th century toys and games for kids, talks on the history of beer and hops in upstate New York and the Schoharie Valley, a Schoharie Valley hops display at the Library, beer samples from Green Wolf and MacKinnon Brothers, and Green Wolf brewery tours.

Middleburgers BBQ and Under the Nose gift shop and bakery will be offering barbeque and baked goods for sale, and Craig Gravina and Alan McLeod will be selling and signing copies of their book Upper Hudson Valley Beer. The day culminates in “The 1780 Beer Challenge” cask tapping and tasting.

The Albany Ale Project, Green Wolf Brewing Co., and MacKinnon Brothers Brewing Co. have issued each other a challenge. A beer-infused re-enactment of the 1780 stand off in Middleburgh between New York’s Loyalist raiders and the Albany County Militia – this time with hops, grain, and yeast, instead of muskets and cannons.

The beers will be blind judged against each other by WNYT NewsChannel 13’s morning anchor Phil Bayly, food and drinks writer Deanna Fox, and Middleburgh Library Director Teresa Pavoldi. The winner receives bragging rights and the official “1780 Beer Challenge Champion” barrelhead. The loser must hoist their opponent’s flag in their respective brewery or taproom. There will also be a “People’s Choice” vote for best beer.

The History Behind the Event

In 1780, as the American Revolution raged a civil war was being fought on New York’s frontier. Neighbor battled neighbor in an escalating conflict between those loyal to the British Crown and those bent on independence. During the 1770s, many New York Loyalists, including Sir John Johnson and the Mohawk leader Joseph Brant, were forced off their land, finding refuge in southern Canada. Set on disrupting the borderlands, Johnson returned to New York in 1780 having raised his Loyalist King’s Royal Regiment of New York while in Canada. With Brant and his Mohawk warriors, Johnson aimed to lay waste to the fertile Mohawk and Schoharie valleys – the “breadbasket” of the Revolution. They embarked on a slash and burn campaign, destroying what had once been their own farms and grain fields, in order to starve the Continental Army.

What Johnson wasn’t expecting was the dogged determination of a rag-tag group of Albany militia and volunteers protecting local families and defending the middle fort—“Fort Defyance”—at Middleburgh, led by Colonel Peter Vrooman, and the sharpshooting hero of the Battle of Saratoga, Timothy Murphy. Low on ammunition, outnumbered three to one and under cannon-fire, the Continental commander, Major Melancthon Woolsey, ordered the surrender of the fort. Murphy, against orders fired over the heads of the approaching Loyalist truce party three times, refusing to relinquish the fort and rallying the defenders behind him. The patriot’s refusal to yield their position cost the Loyalists precious time on their advance north. Although Johnson’s successful campaign devastated the Schoharie farmlands, the delay at the middle fort would help the American forces marching from Albany to halt Johnson’s attacks in the Mohawk Valley.

“Beer and history are intertwined. In fact, beer is history,” says Craig Gravina. “The raids on Schoharie’s farms affected brewing in Albany and the Upper Hudson Valley. No grain, no beer. Plus, many people are unaware of this part of New York’s history.” Alan McLeod adds, “Loyalist or patriot, beer was a commonality to those fighting for their cause on either side.” Gravina continues, “The popularity of craft beer today—being made by places like Green Wolf and MacKinnon Brothers—allows us to use beer as a way shine a light on what happened 235 years ago.”

“Preserving local history has been part of the mission of the Middleburgh Library for over 80 years,” adds Middleburgh Library Director Teresa Pavoldi. “As a host of the 1780 Beer Challenge, we have an opportunity to educate and explore the rich history of brewing and hops production in our rural community and how that impacted the lives and traditions of the people living here. Understanding how Middleburgh fits into the vast brewing history of the upper Hudson Valley is exciting! Plus, we’ll get to step back in time and sample some historic brews—how much fun is that?”

“We’re excited to participate in the 1780 Beer Challenge,” says MacKinnon Brothers Brewing Company’s Ivan MacKinnon. The MacKinnons brew on their family’s Ontario farm established in 1784 by Loyalist from New York. MacKinnon emphasizes, “This is an excellent opportunity for us to explore the brewing heritage of our ancestors. Our beer, made with ingredients from our farm, will reflect the character of the Loyalists that left New York over 200 years ago to settle the land that we continue to farm today, eight generations later.”

Justin Behan, owner/brewer of Green Wolf Brewing Company, wants to ‘pour history back to life.’ “Middleburgh has always had strong ties to farming and agriculture.” Behan states, “The Schoharie Valley was the breadbasket of colonial America, and today Green Wolf and MacKinnon Brothers are continuing that tradition—we are both farm breweries. The 1780 Beer Challenge is a great venue to celebrate our shared agricultural history and brewing heritage.”

Schedule of Events (subject to change)

1:00 pm – 5:00 pm: Revolutionary war encampment with the Burning of the Valleys Military Association (US) and the King’s Royal Yorkers (CAN) living historians, featuring:

Admission for the 1780 Beer Challenge and Revolutionary War Festival is $15 (for adults 21 years of age and older) and includes beer sampling tickets and a Green Wolf sampler glass, or $35 for sampling tickets, a Green Wolf sampler glass, and a signed copy of Gravina and McLeod’s book Upper Hudson Valley Beer. Admission for non-drinkers, or those 20 years of age or younger is $10. Children and teenagers under 15 are free. All ages are welcome but you must be 21 to drink.

From the NYS Thruway Northbound: Take US I-87 north to exit 21 (NY-23/Catskill/Cairo). Turn left onto Main Street, then right onto the Catskill/Cairo ramp and merge onto NY-23. Make a slight right onto NY-145 north continue for 29 miles to the village of Middleburgh. The 1780 Beer Challenge will be on the left at Baker Avenue.

For more information or questions about The 1780 Beer Challenge and Revolutionary War Festivalcontact Craig Gravina at drinkdrank1@gmail.com or at (518) 669-1113.