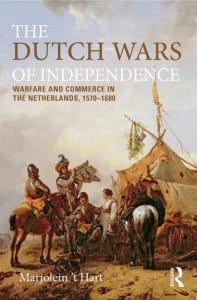 In The Dutch Wars of Independence: Warfare and Commerce in The Netherlands, 1570-1680 (Routledge, 2014), Marjolein ’t Hart assesses the success of the Dutch in establishing their independence through their eighty years struggle with Spain – one of the most remarkable achievements of the sixteenth and seventeenth centuries.

Other rebellions troubled mighty powers of this epoch, but none resulted in the establishment of an independent, republican state.

The volume investigates thoroughly the economic profitability of warfare in the early modern period and shows how smaller, commercialized states could sustain prolonged war violence common to that period.

The book moves beyond traditional explanations of Dutch success in warfare focusing on geography, religion, diplomacy while presenting an up-to-date overview and interpretation of the Dutch Revolt, the Anglo-Dutch Wars and the Guerre de Hollande.