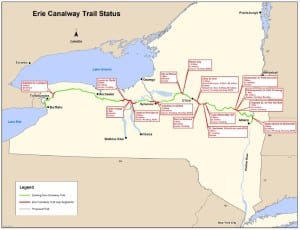 The report is intended to update canal corridor communities and national, state, and local decision makers on recent progress and current trail status as well as underscore the need for the resources and political support to ensure the 360-mile Erie Canalway Trail is finished.

According to the report, 281 miles of the Erie Canalway Trail are now open to the public between Albany and Buffalo. Of the remaining 79 miles, 24 of those miles have an identified source of funding and are programmed for work to start within the next three years. For 55 miles of trail, there is still no identified funding and/or right-of-way issues present challenges to defining or developing a trail route. When finished, the Erie Canalway Trail will be the longest, continuous statewide multi-use trail in the nation.

“The Erie Canalway Trail is without parallel in scenery, history, and charm but it can’t reach its full potential as an international tourism draw and economic engine for more than 200 trail communities until it is complete,” said PTNY Executive Director Robin Dropkin. “We are very pleased with the progress that has been made in closing the gaps and thank the Canal Corporation and local governments for their vision and commitment. We hope that opportunities such as the state’s CFA grants program and continued strong support for closing the gaps among trail users, corridor residents, and at all levels of government will make it highly probable that the entire 79 miles of trail will be under construction or in design by the 2017 bicentennial of the start of construction of the original Erie Canal.”

According to the first comprehensive study of the Erie Canalway Trail visitor, released by PTNY in 2014, the trail presently receives an annual trail traffic volume of more than 1.58 million visits per year, which generates an economic impact of approximately $253 million and supports 3,440 jobs in the local economies within the trail corridor. The Economic Impact of the Erie Canalway Trail: An Assessment and User Profile of New York’s Longest Multi-use Trail was funded in part by the New York State Canal Corporation and Erie Canalway National Heritage Corridor.

Canal Corporation Director Brian U. Stratton said, “Governor Cuomo recognizes the strategic importance of the Erie Canal and Erie Canalway Trail as economic engines for upstate New York.  Under the Governor’s administration, 32 miles of new or rehabilitated trail have been completed, are planned or are now under construction.  In 2014 alone, 11 miles of Erie Canalway Trail were constructed by the Canal Corporation in Monroe and Oneida Counties, demonstrating Governor Cuomo’s enduring commitment to achieving the full potential of this important resource.”

Additional progress in closing the gaps will result from the efforts of local Canalway Trail communities, the Regional Economic Development Councils, the NYS Department of Transportation, and the NYS Canal Corporation working together to address specific needs and challenges in discrete trail segments. CTANY and PTNY will continue to support and promote those efforts and, through initiatives such as a new website devoted exclusively to Erie Canal tourism to be launched in late Spring, actively market the trail to cyclists and adventure tourists as well as reinforce the importance of the Canalway Trail to tourism, local economies, and the health and the quality of life of Canalway Trail-community residents.

Closing the Gaps: A Progress Report on the Erie Canalway Trail 2014 is available as a pdf on the Parks & Trails New York website.

The Canalway Trails Association New York is an all-volunteer organization that works both statewide and locally with citizens, state agencies and municipalities to develop the Erie Canalway Trail as a world-class multi-use recreational trail and international bicycle tourism destination. In partnership with the NYS Canal Corporation, PTNY and others, it encourages the proper maintenance of the trail by coordinating the Adopt-a-Trail Program.