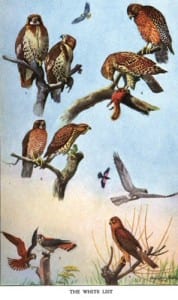 After a “Black List” of animals was promulgated by New York State officials and an all-out war against these “vermin” was launched in the early 20th century, a competition grew among fish and game clubs across the state. Some clubs were founded for the specific purpose of complying with the state’s plea for help in eradicating unwanted animals.

Many clubs held contests, applying point systems to each animal on the list and awarding prizes to the winners. “Contest” was in some cases a misnomer: in many cases, it was a year-round process punctuated by periodic awards.

Each conservation commissioner urged the public to partake. In 1927, Llewellyn Legge said of the Black List animals, “It should be the object of every sportsman, when afield, to kill any of the vermin he sees…. Game clubs should organize vermin days and see that their territory is free from enemies of our game birds and our insectivorous birds.”

Surprisingly, the so-called “animal preserves” owned by hunting clubs and wealthy individuals came under attack for effectively providing safe havens for vermin. Game Protector E. T. Townsend said, “There is no shooting on a refuge, and vermin is always smart enough to be the first to recognize this fact.”

Animal lovers reading this will cringe at the kill totals turned in by game protectors, while realizing that the numbers attained by thousands of citizens and hunters were certainly much higher.

By then, officials had begun blanketing the branding plan with newfound sensitivity. Rather than flooding the media with kill totals, the state said results were attained by “protectors who are instructed to humanely destroy such animals when found afield.” No one explained the difference … being shot by a rifle or humanely destroyed by one. Again, great job of branding.

This practice went on in some form for decades. With the body counts coming only from 100 to 150 on-staff game protectors, it’s staggering to contemplate the numbers generated by game clubs and thousands of individual hunters and farmers, all engaging in vermin elimination year-round.

Some animals were fortunate to avoid the Black List. Two main factors were addressed: diet as determined during autopsies, and the value of an animal’s fur. Birds of prey who mainly fed on other harmful birds or on insects were placed on the official White List as beneficial to nature and man.

One problem with that: the average person can hardly discern one hawk from another, yet shooters were simply given a list and told to fire away. They could also shoot ospreys, but it wasn’t required. No one explained how shooters would recognize the five hawks on the protected White List.

Other critters like skunk, mink, and raccoon caused damaged, but the dollar value of that damage was more than offset by the market value of their fur, which kept them off the Black List. They couldn’t be killed as vermin, but were instead preserved for harvest by hunters and trappers.

Things have changed, but with the occasional excitement over snowy owl appearances, it seems hard to believe they were vermin for so long, and had no protection until 1960. As former members of the Black List, they were once sanctioned targets for practice, of less value than clay pigeons.

Today, instead of simply arming the troops and declaring war, we’ve used science to study animal behavior and arrive at different solutions. The result: “nuisance animal” laws, perhaps not a perfect system (after all, what is?), but quite an improvement.