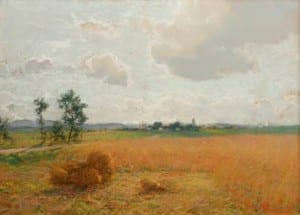 Artist Walter Launt Palmer (1854–1932), the son of Albany sculptor Erastus Dow Palmer, enjoyed a revival of interest in the art world in the 2010s. It became common to see his paintings in art magazines and at major auctions across the country, bringing record prices for his oils and watercolors.

As an artist who preferred living and working in his home community of Albany, rather than New York City, Palmer carried forward the creative genius that emerged in the region generations earlier with the Hudson River School and his father’s own sculpture.

Walter Palmer, known as Wallie among friends and family, grew up in a household and community well connected with the arts. The portrait painter Charles Loring Elliot gave the young boy his first set of paints at age twelve, and a few years later the period’s most respected landscape artist, Frederic Edwin Church, tutored the young man. 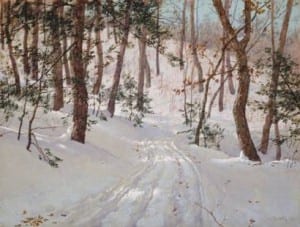 Palmer began exhibiting his work in the early 1870s, but it was his travels in Europe with his family in 1873 and 1874 that exposed him to the great masters and to new trends in art.

He met, for example, the younger American painter John Singer Sargent, who was working in Italy, and remarked in a letter that “his style is bold & vigorous.” Palmer adopted a similar style for some of his early paintings. In 1876, he returned to Europe again to continue studies with the Parisian painting master Charles-Émile-Auguste Carolus-Duran.

After his return to Albany in 1877, Palmer began painting his first significant series: building interiors. Palmer’s interiors are rich in detail and invite close inspection. He lavished attention on the textiles, ceramics, furniture, and wall decorations that filled well-furnished parlors, libraries, and hallways. He even painted the dining room at Appledale, the Palmer family home, where he included one of his sisters seated in a rocking chair beside the fireplace.

Palmer traveled to Europe for a third time in 1881 specifically “to paint some of the fine ‘interiors’ that are entirely lacking in our own country,” as he noted in a letter to the Albany Argus. There, he did find many fine interiors that became the subject of his canvases, but it was during this stay in Europe that the city of Venice caught his attention. The pastel colors of buildings, water, and the moisture-laden atmosphere captivated the artist. Throughout the 1880s and 1890s Palmer painted numerous oils and watercolors of this Italian city, including the Piazza San Marco, St. Marks Basilica, and the Grand Canal. 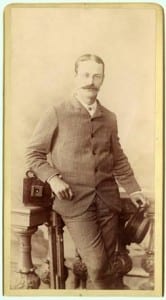 By the mid-1880s Palmer began working on yet a third series: winter scenes. His winter paintings captivate viewers with their serenity and masterful tonal subtleties. Fir trees and barren branches droop under the weight of freshly fallen snow and ice glistens on half-frozen streams in a way that captures the immediacy of the moment. Palmer, in fact, has often been called the “painter of the American winter.” Most of his winter scenes he painted from memory, and he continued to paint these popular landscapes until his death in 1932.

The Albany Institute of History & Art holds one of the largest public collections of work by Walter Launt Palmer, including oil and watercolor paintings, pastels, and drawings, as well as letters and photographs. In 2015, they held an exhibition, “Walter Launt Palmer: Painting the Moment,” which presented a broad range of Palmer’s work, offering a visual overview of his life, travels, and artistic interests.