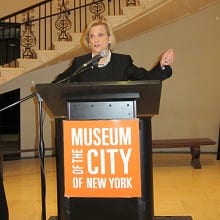 Susan Henshaw Jones, the Director of the Museum of the City of New York, will retire in December 2015, according to James G. Dinan, Chair of the museum’s board.  Jones has been the director of the Museum since February 2003.  Museum board members are forming a search committee to find the City Museum’s next director.

Jones’ departure comes near the conclusion of a 10-year, phased expansion and modernization of the Museum, which will be completed in June 2015.  She presided over a $97 million expansion and renovation of the 83-year-old landmark building located on Fifth Avenue and 103rd Street, and the creation of the new Frederick A. O. Schwarz Children’s Center.

Jones is currently presiding over the development of what will be a major long-term exhibition on the entire sweep of New York City’s history, which is scheduled to open in October 2016.  New York at its Core will occupy the Museum’s entire first floor, and the installation will include the Future of the City Lab – where visitors can participate, creating and offering their vision of the City’s future.

Changing exhibitions over the last 12 years have included Everything is Design: The Work of Paul Rand; Hip-Hop Revolution; Gilded New York; The Greatest Grid: The Master Plan of Manhattan, 1811-2011; Palaces for the People: Guastavino and the Art of Structural Tile; City as Canvas: Graffiti Art from the Martin Wong Collection; and America’s Mayor – John V. Lindsay and the Reinvention of New York.

While the museum has been partially closed during the phased renovation, attendance has grown substantially according to officials, now serving about 250,000 visitors each year. The Frederick A. O. Schwarz Children’s Center expects to welcome 47,500 New York City schoolchildren and teachers – the great majority of whom attend public schools – through June of this year.

Major portions of the museum’s collections are being digitized with a total of 165,000 images currently online at the Museum’s Collections Portal – providing easy access to scholars and the public worldwide.

Over the past decade, the City Museum’s net assets have nearly tripled officials say, and the operating budget has grown from $6 million to $20 million.

Prior to serving at the City Museum, Jones was President and Director of the National Building Museum in Washington D.C from 1994 to 2002.  Her career began in New York City however, where she was the President of the New York Landmarks Conservancy from 1988 to 1994 and Executive Director from 1975-1980.   She left the Conservancy in 1980 to attend business school and to help run her family’s manufacturing company.  She began her career in New York City in the early 1970s in the Lindsay Administration and was one of three founders of Creative Time, a non-profit devoted to art in the public realm.

Jones attended Vassar College, where she graduated with a B.A. in English Literature. She received her MBA from Columbia University’s Graduate School of Business.  She is married to Richard K. Eaton, a federal judge, and they are the parents of Alice and Liza Eaton.

For more information about the museum visit www.mcny.org.