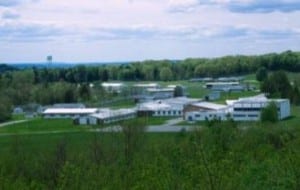 Bobby Stewart of Tribes Hill won the National Golden Gloves Tournament as a light heavyweight in 1974, beating Mike Dokes in Denver, Colorado. It was the high point of Stewart’s amateur boxing career and was preceded by numerous regional bouts. His amateur record was 45 wins and 5 losses.

Amsterdam had a lively boxing scene years ago. Stewart was raised in Amsterdam on McDonnell Street and Chapel Place. His father was a New York State Police officer and his mother worked in local doctors’ offices.

Stewart turned professional after the 1974 Golden Gloves Tournament and won 13 of his 16 fights. But he was disturbed by what he felt was an unfair decision in one of the professional fights. He regrets that he did not wait to compete in the 1976 Olympics before embarking on his professional boxing career.

By 1976 he was working as a counselor at the former Tryon School, a facility in Perth for youths in trouble with the law. Over the years he also tended bar at Russo’s Tavern in Amsterdam and the Chelsea House in Tribes Hill.

Mike Tyson, a street tough from Brooklyn, was one of the inmates at Tryon in the late 1970s. Tyson wanted to learn boxing techniques and wanted Stewart to train him. Tyson even acted up so he could get transferred to Elmwood, the cottage at Tryon that housed the toughest young males where Stewart was assigned.

Stewart said Tyson was “looking to do something, either bad or good.” Under Stewart’s strict regimen, Tyson, not yet a teenager, began to develop his fighting skills. His reading level improved from third to seventh grade. Stewart still bristles that Tyson was labeled “borderline retarded” at the reform school.

Stewart said, “He was a complete gentleman as he wanted to fight so bad.” Tyson was observed by staff practicing boxing routines in his room at 1:45 a.m.

“A good work ethic is very important,” Stewart said. And Tyson was willing to work. As the young boxer progressed, he became stronger, breaking Stewart’s nose in one sparring session. Fortunately, the older fighter had the next week off from Tryon and was able to recuperate and continue training Tyson.

After a few months, Stewart got permission to take Tyson to Catskill, New York, where his skills could be assessed by famed trainer Constantine “Cus” D’Amato. D’Amato knew Stewart and had worked with champion boxers including Floyd Patterson and Jose Torres. 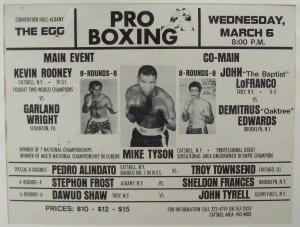 Stewart and Tyson were boxing three rounds for D’Amato and D’Amato’s gym manager Teddy Atlas. Stewart hit Tyson in the nose toward the end of the match and the young man began bleeding although his nose was not broken.

Atlas wanted to stop the fight but Tyson said he wanted to finish it as he always did three rounds with Stewart. They finished the three rounds.

D’Amato pronounced that barring outside distractions Tyson, then twelve or thirteen, would become world heavyweight champion.

D’Amato adopted the young fighter after Tyson’s mother died. Tyson did become a champion in 1985 shortly after D’Amato died. But the boxer’s life since has been marked by a rape conviction and outrageous acts, including biting the ears of opponent Evander Holyfield in 1997.

Stewart last saw Tyson in 2013 when the former champion had a limousine sent to Amsterdam to take Stewart to Westbury, Long Island to see Tyson’s one man stage show.

Photos: Above, the former Tryon Boys School; and below, a poster announcing Mike Tyson’s professional boxing debut in 1984 at The Egg on the Empire State Plaza.