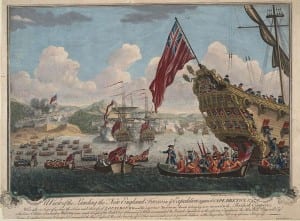 On Tuesday, April 21 at 7 pm, at the New York State Military Museum in Saratoga Springs, Matt Kirk from Hartgen Archeological Associates will present findings on the investigation of Colonial Era Battlefields in the Fish Creek area of the Hudson River in the town of Saratoga.

The current study, while providing a broad historical context, focuses more particularly on two major, colonial wars: King William’s War (1687-1698) and King George’s War (1744-1748). During this time at least five battles/raids/skirmishes occurred within or immediately near the Study Area, with numerous others in the general vicinity. The study utilizes the historical record to identify potential areas of archeological resources associated with the two wars and their associated battles.

The project was funded by a grant from the American Battlefield Protection Program awarded to the New York Natural Heritage Trust who administered the grant.This talk is presented by the Friends of Saratoga Battlefield and Saratoga National Historical Park.

Illustration: View of the English landing on the island of Cape Breton to attack the fortress of Louisbourg 1745 (1747).