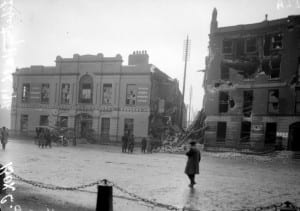 Ruan O’Donnell is a Senior Lecturer in History at the University of Limerick.

A former Visiting Chair of Irish Studies at the Keugh-Naughton Institute, Notre Dame (2010-11), O’Donnell is the author of numerous publications on the history of Irish Republicanism including Special Category: The IRA in English Prisons, 1968-1978. O’Donnell is the founding co-general editor of the 16 Lives series of new biographies of all those executed for their participation in the 1916 Rising being published by O’Brien Press.

This program, which is free and open to the public, will be held on Wednesday, April 22 at 7 pm at the Irish-American Heritage Museum, 370 Broadway, in Albany. Street parking is free after 6 pm (do not park in the private lots behind the museum).

Photo: Liberty Hall, headquarters of the Citizen Army during the Easter Rising, following its bombardment by the British.