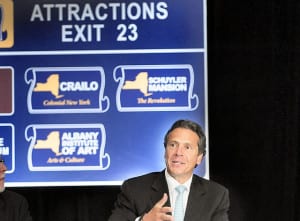 The Albany-Manhattan bubble is a term I use to describe the alternate reality in which the New York State government operates regarding history tourism.

Recent events in New York, Albany, and Corning (The New York Times Travel Show, Tourism Action Day, a Tourism Advisory Council Meeting, and the Museum Association of New York Annual Conference), and the presentations and comments I heard from by the inhabitants of the Albany-Manhattan bubble, demonstrate a disconnect with the real world and little hope that anything constructive will be done to bridge that gap.

At the travel show, Ross identified four areas of tourist promotion for the state: adventures and eco-tourism, the Path through History, Taste NY, and LGBT. He said the Path was really important for New York and mentioned 350 attractions. I presume he was referring to the number of sites on the Path website and not to the total number of historic sites in the state. This does raise the issue of how many of the historic sites in the State are on the website. For example, in the Town of Rye where I live, Playland Amusement Park is listed, but the Rye Historical Society is not. Nor is Tom Paine Cottage in New Rochelle where I grew up. I confess that navigating the site and its search engine leaves me mystified – perhaps I missed them.

At Tourism Action Day New York’s Lieutenant Governor Kathy Hochul addressed the assembled advocates in the well of the Legislative Office Building. She praised Governor Andrew Cuomo for his support of tourism specifically referring to his personal involvement with winery tourism, fishing, and food. She didn’t mention Governor Cuomo visiting an historic site. When was the last time you saw a photo-op of the Governor at an historic site? If a picture is worth one thousand words than the absence of that photo undermines a thousand press releases.

The Lieutenant Governor did mention seeing a Path through History sign at a women’s event in Seneca Falls. I doubt she meant to suggest that the Path through History contributed to creating the program in any way. I hope she meant to suggest that the sign was visible proof that Cuomo is making an effort on behalf of history tourism through the erection of these signs. At the MANY conference, Ross Levi mentioned that over 3,200 signs have been (including some for locations which previously had no sign). The signs do represent actual work that has been done, but one recent commenter noted:

“I too have a major problem with NY State Tourism and the Path through History program. First off, their road side signs are a disaster; way too small for someone driving by at 60+ MPH. They may not be able to help it, but some signs have way too many local destinations on them for a driver or passengers to fully appreciate. When I reached out to them on several occasions regarding this and other suggestions, I received the standard response and attitude from these type organizations , “thank you, but we know what we are doing and have a nice day.”

While this hardly qualifies as a scientific sample, it does raise the issue of what benefits the signs have produced.

The Tourism Advisory Council Meeting is open to the public and the press. I reserved my attendance as a member of press. My impression from the meeting is that no member of the press ever attended before so they took for granted I was part of the history-public.

During the recent Tourism Advisory Council Meeting, the Path through History project was described as a very exciting major component of New York State tourism (I was deep in the bubble here). Ross Levi stated that there were 380 Path Weekend events in 2014. At the Museum Association of New York (MANY) conference, in a session entitled “Perfect Partnerships: Museums and Tourism”, Levi repeated this information and added a small phrase to the effect that many of these events were activities “you already do.” That is the same sentiment that Dutchess County Historian and now chair of the Path through History Hudson Valley Region Will Tatum made at the Conference on New York State History last June. I noticed that Ross Levi didn’t mention this detail while speaking inside the bubble, nor did he reveal that the major contribution of the path Through History project was simply to brand what historic organizations were already doing as Path events.

There are several problems which the Tourism Advisory Council does not seem to grasp:

1. The Path weekend events are local in nature and generate virtually no heads-to-beds tourism. They primarily consist of day trips for local people visiting their local historic site for a few hours at most.

This information is significant given the information packet disseminated to the advocates on Tourism Advocacy Day. The Tourism Industry Coalition distributed a chart in dollars of the tourist tax contribution to each county arranged by regions. The Coalition uses 11 regions which do not match I LOVE NEW YORK, REDC, or NYSOPRHP divisions. The breakdowns provide the local taxes, the states taxes, and the tax-savings per household in each county to the show the economic impact of tourism. Here is the problem: the Path weekends contribute virtually nothing to these totals beyond local gas and lunch expenditures. That’s right: the signature event of the Path through History project generates almost no state or local taxes.

2. Some historic sites resent the last-minute “Simon Says” games of the Path through History. The Path weekends have shifted from the original Museum Weekend in May, to the first two weekends in June, and now to June 20-21. I received an e-mail notice on February 25th, but how complete is their e-mail list beyond the 350 attractions listed on the website?

Furthermore, it should be noted that organizations such as museums and historic sites make plans in advance: newsletters are sent, websites are updated, speakers invited, arrangements made. By the time people learn the date it may be too late to change to comply with the new dates. What’s more, some of the anniversaries which occur in early June and made the list last year can’t be shifted to make the list this year.

Why not just call June “Community Heritage Month” celebrating a sense of place, a sense of belonging, a sense of community and knock off the obvious nonsense that the Path through History weekends contribute tax revenue from new events and it demonstrates the Governor’s support of history tourism?

At the MANY conference Ross Levi had to bear the brunt of the Path questions due to the illness of Mark Castiligione, listed in the program as the Director of the Hudson River Valley Greenway and National Heritage Area (no mention of Path through History). Here are some observations:

1. During the Q&A, he was asked about the $1,000,000, Governor Cuomo pledged to the Path project at the kickoff on August 28, 2012. What happened to the money? How was it spent? Ross didn’t know.  Mark Castiligione may have been able to answer that question, although I doubt readers of the New York History Blog would have liked his answer. There is a lack of communication about the project, not to mention the lack of transparency and accountability. There also remains the question of why funds are not allocated annually to the Path project.

2. During the Q&A, it was pointed out again that no one works on the Path project full time.

3. After the Q&A, comments were made in private as to why the LGBT community was the only demographic group singled out for special attention. “What about African-Americans?” someone asked. One could also add various other demographic groups.

As it turns out, the person who really skewered the Albany-Manhattan bubble without intending to was Representative Paul Tonko. He receive the 2015 MANY Legislative Leadership Award, a first for the organization. He was recognized for his work on behalf of museum and cultural institutions in the state. In his acceptance comments, he spoke strongly and repeatedly on the importance of place. He emphasized the role and importance of historic and cultural institutions to the well-being and fabric of communities. He never spoke about tourism or singled out a specific demographic group.

So what does the Path project have to show after 2 ½ years?