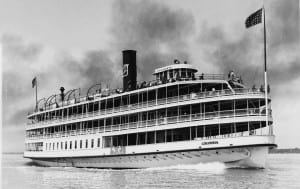 In the years between 1807 and 1971, the Hudson River was alive with boat traffic. The great Hudson River Day Liners were perhaps the best known of all the vessels – famous for their elegance and speed. New Yorkers and visitors alike experienced the river and magnificent landscapes from their decks and plush salons.

Now, a New York City nonprofit is planning to restore the S.S. Columbia, believed to be America’s oldest surviving excursion steamship, for service on the Hudson River between New York City and Albany, with stops at Bear Mountain State Park, Poughkeepsie, Kingston, and Hudson. 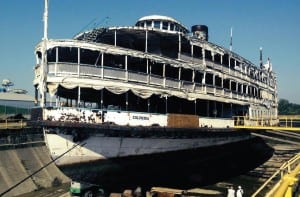 Although the S.S. Columbia is a newcomer to the Hudson – it plied the waters of the Detroit River for much of the 20th century – its history is strongly linked to New York City. The Columbia was designed by naval architect Frank Kirby and artist Louis O. Keil, who together built the celebrated Hudson River Day Line steamers Hendrick Hudson, Washington Irving, and the Robert Fulton.

Built in 1902, the S.S. Columbia included an array of design, engineering and aesthetic
innovations. At just over 200 feet in length and 60 feet at the beam, the boat was designed to carry 3,200 passengers on her five decks. She was adorned with mahogany paneling, etched and leaded glass, gilded moldings, a grand staircase and an innovative open-air ballroom. Restoration of these features is expected to begin when the ship in New York. The Columbia will be powered by its rare and intact 1200 horsepower triple expansion steam engine; the massive engine is viewable by passengers. 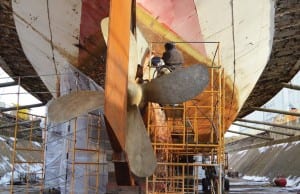 Columbia is currently in a shipyard in Toledo, Ohio, where the crew replaced nearly 60% of her hull in preparation for the journey to New York. In June 2015, the boat is expected to travel the 235 miles from Toledo to Buffalo before beginning the voyage up the St. Lawrence Seaway and down the Atlantic Coast to New York City in 2016.

The S.S. Columbia Project is currently seeking to raise $300,000 for the work needed to secure the boat for passage to New York Harbor. To learn more about the project visit their website at www.sscolumbia.org, or call (212) 228-3128. Their office is located at the Neighborhood Preservation Center, 232 East 11th Street, in Manhattan.

Photos, from above, provided: The SS Columbia operating in the 20th century; immediately after being moved into drydock in Toledo; and a worker operates a grinder near the Columbia’s screw at the Toldeo shipyard.