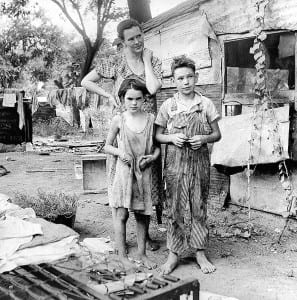 How useful are historical insights in addressing a state’s problems?

California is experiencing a historic drought so severe that Governor Jerry Brown has ordered a 25% reduction in the use of water with some exceptions, e.g., certain types of agriculture. As California endures this crisis, how helpful is historical insight in both understanding it and charting a way forward? So far, the results are mixed.

Governor Jerry Brown, imposing the restrictions, noted that “For over 10,000 years, people lived in California but the number of those people was never more than 300,000 or 400,000. Now we are embarked upon an experiment that no one has ever tried: 38 million people, with 32 million vehicles, living at the level of comfort that we all strive to attain. This will require adjustment. This will require learning.”

University of Southern California historian Kevin Starr, author of California: A History and Americans and the California Dream, told the New York Times that “Mother Nature didn’t intend for 40 million people to live here. This is literally a culture that since the 1880s has progressively invented, invented and reinvented itself. At what point does this invention begin to hit limits?” California “is not going to go under, but we are going to have to go in a different way.” He noted in USA Today that the Great American lawn “is a thoroughly British invention” that really has no place in California. When Sanford University was first built, he noted, it sourced plants from “similar climates such as Morocco and Spain.” California “will just have to reinvent itself through a new view of what it means to live here….” What we need, he said, is “a new, more mature California lifestyle, because when you face scarcity, you need a higher level of culture.”

Another, deeper and more unsettling historical perspective is presented in an article by B. Lynn Ingram, “The West Without Water: What Can Past Droughts Tell Us About Tomorrow,” posted on the Ohio State University History Department website “Origins: Current Events in Historical Perspective,” a very interesting site that presents historical perspectives on current events. Ingram is a professor of geography and earth and planetary science. She warns that the historical record, including growth rings in submerged tree stumps and other geological evidence, shows that “the climate and rainfall patterns have varied tremendously over time, with stretches of drought many decades longer than the one we are experiencing now.” She cites explorer John Wesley Powell’s 1879 Report on the Lands of the Arid Regions of the United States which emphasized how dry the region was. His study was mostly ignored, she asserts. She explains that other historical evidence has also been slighted. Her study of history suggests that long periods of drought are the norm for California.

New York has plenty of water and fortunately is not facing any crises on the magnitude of California’s drought. But we are facing lots of problems that might be easier to confront with more understanding of and insights from our history.

Are we any more adept than California in calling on that history and putting it to work? Some examples:

*Study of the Married Women’s Property Act and the Seneca Falls Convention (both 1848) and the subsequent half-century crusade for women’s rights in New York, particularly Elizabeth Cady Stanton’s work, would help inform the debate in the legislature over the proposed Women’s Equality Act.

*The debate over the Common Core curriculum, student testing, and teacher evaluation would be enlightened by review of the creation of the State Education Department in 1904, the work of its first Commissioner, Andrew Sloan Draper, and The Regents’ Inquiry Into the Character and Cost of Public Education (1935-38), one of the most searching studies ever made of public education in New York.

*The probable effectiveness of New York State’s new promotional campaign and slogan, New York: State of Opportunity, developed by the Empire State Development, the state’s economic development agency, might be easier to gauge through study of past slogans and campaigns, dating back to the first one, New York Means Business, in 1944.

*One of the Cuomo administration’s priorities is attracting new businesses and jobs to New York. Our state through much of its history has been the most important business and industrial center in the nation. What factors gave New York the lead? A study of companies with deep New York roots, such as IBM, with origins in Endicott in 1911, would provide some enlightenment.

* We are concerned these days about crumbling infrastructure, including highways and bridges, and transportation of hazardous oil over rail lines. The Erie Canal has been studied extensively. But understanding more about how and why the state encouraged and supported railroad development, built the Barge Canal (opened 1918) and the New York State Thruway (mostly opened in 1954) would help provide insights about past state transportation policy development.

* We might be able to shed light on current issues and problems in race relations through study of the nation’s first state civil rights act (here in New York, in 1945) and Jackie Robinson’s pioneering role in becoming the first black major league baseball player (Brooklyn Dodgers, 1947).

*Study of New York’s three Civil War governors — Edwin Morgan (1859-1863), Horatio Seymour (1863-1865), and Reuben Fenton (1865-1869) — mostly ignored or slighted by history, could provide insight into executive leadership in hard times. Seymour is particularly interesting – he supported the war and made sure New York kept up its contribution that surpassed any other state and at the same time opposed the draft and Lincoln’s wartime restrictions on civil liberties. Debates during the war were spirited. But the government pulled together to accomplish what needed to get done.