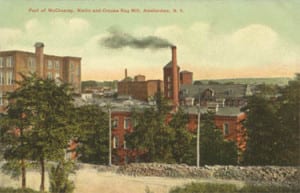 Mark Thomann, who has spent much of his working life on restorations of classic carpets, is skeptical of the idea that paper cards used to control carpet weaving in Amsterdam and other places directly foreshadowed development of the computer.

Thomann said, “I have heard that but always thought it a stretch. There is the similarity of the use of punch cards, with a binary system, no hole or hole which would determine position of a strand of yarn. But I have never seen evidence that someone familiar with that industrial technology was at all involved in making computers.”

Thousands of cardboard cards were used to weave carpets in Amsterdam years ago on what were called Jacquard looms, named for Joseph Marie Jacquard of Lyon, France, who came up with improvements to the mechanical loom in 1801.

Jacquard looms had a chain of punched cards which were tied together to determine whether yarn of a particular color would be visible or buried beneath other yarn.

The website of the Computer History Museum states that English mathematician Charles Babbage did use punch cards similar to those utilized on Jacquard looms when developing his “Analytical Engine” to perform computations. Babbage died in 1871.

The holes in the paper cards on Jacquard looms originally were punched manually. Amsterdam’s Walter Elwood museum has a 1923 picture of a woman factory worker manually punching the holes. In the heyday of Amsterdam carpet production the cards were punched by machine.

Thomann said there are still Jacquard looms in operation and the holes that determine where the yarn goes are punched with computers control today. Thomann is owner of Stuart Jackson LLC, a firm that recreates historic floor coverings. 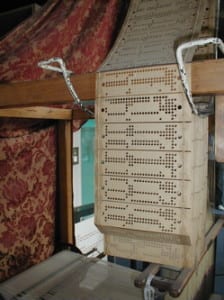 One of the reasons the carpet industry left Amsterdam, and the Northeast according to Thomann, was a shift by the industry to the tufting process. Tufting produces carpet more quickly than the weaving process used in Amsterdam. One issue, Thomann said, was that the tufting machines were too huge and heavy to fit into the old multi-storied mill buildings in Amsterdam and other northern cities.

According to an industry trade group, the Carpet and Rug Institute, tufted carpet accounts for 95 percent of carpets made today.

On its website, the Carpet and Rug Institute describes tufting this way, “(It) is the process of creating textiles, especially carpet, on specialized multi-needle sewing machines. Several hundred needles stitch hundreds of rows of pile yarn tufts through a backing fabric called the primary backing.”

In the weaving process, yarns are simultaneously interlaced, eliminating the need for a secondary backing. Some American-made carpets are still woven this old-fashioned way at three locations – Eden, North Carolina; Landrum, South Carolina; and Bloomsburg, Pennsylvania.

Bloomsburg Carpet advertises that it maintains the tradition of weaving carpet in the styles that formerly were woven in Amsterdam, including Axminster and Wilton. These names derive from locations in England where the rugs were first produced.

According to the photo of an advertising display used by Mohawk Carpet now archived at the Walter Elwood Museum, Mohawk’s North Shore Wilton brand promised it was available in 14 colorful patterns. Axminster carpet also was known for use of many colors and patterns. In its Amsterdam days Mohawk used the advertising slogan, “On the well covered floor, every square inch counts.”

Photos: The postcard above reads “Part of McClearey, Wallin and Crouse Rug Mill, Amsterdam, N.Y.”; the buildings were later part of Mohawk Carpet; below, punch cards used by a Jacquard loom on display at the Museum of Science and Industry in Manchester, England (courtesy Wikimedia user George H. Williams).

A version of the post first appeared in the Daily Gazette.