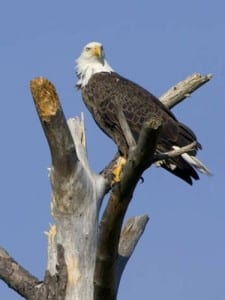 From a lifetime of experiences, and reading nature books since childhood, it’s true that I should know a little more about wildlife than the average Joe, but I lay no claim to being an expert. Learning something new is a principal reason for reading books, and of late, I’ve had occasion to indulge in several excellent Adirondack-related titles written between 1840 and 1920.

In one of them, a particular passage caused me to stop, backtrack, read it again, and then one more time in disbelief. Since other animal behavior described in the book held true, I supposed this one should as well, but I had reservations. Above all, one thing was certain: confirmation would be hilarious, at least to my thinking. The claim was that bald eagles snore. And not only that: they snore LOUDLY. Experienced guides and hunters claimed it to be true.

On camping trips I’ve taken in the woods over the years, odd and unusual night sounds have proved puzzling and even intimidating at times. A snorting, growling sound, persistent for hours during a trip 30 years ago on the eastern slopes of Lyon Mountain, would have scared me half to death had I been alone.

But there were three young children to protect, and being the brave dad, I relieved their fears by venturing out of the tent at midnight, locating the source of the racket, and putting an end to it. Well, I didn’t actually put an end to it, but all fear vanished and we shared a good laugh, knowing that the huge bear lurking nearby was actually a trio of gnawing porcupines. Who knew they could make such a racket?

Among the three heron rookeries I’ve visited, one (now vacant) is not known to the public. It’s located in a northern swamp I encountered while bushwhacking. If you’ve heard the raucous, crazy calls that emanate from an active rookery, imagine the effect in the dark of night. What an odd experience it is, one not to be forgotten. (For me it conjured images of dinosaur days.)

If you’ve never spent a night in the woods—not at a campground, but in the forest, well away from residual light and sound—it can be a real eye-opener, literally. There are bird sounds, which under cover of darkness don’t fit the average person’s expectations of nighttime fare. Likewise, the snort of a deer can be frightening when there is no visual attached. There are sounds of branches cracking, shuffling noises from the ground, and if you’re lucky, a falling tree. Everything is magnified by the general silence.

And if you enjoy a good fright, owls can be downright terrifying with all manner of shrieks and yells (they don’t all just do the “who-whoo” thing). The mind wonders, wanders, and begins playing tricks.

But now to those supposed avian snorers. In my lifetime, only in relatively recent years has there been a good chance of seeing an eagle in the North Country. Or a peregrine falcon. Or a raven. Or a wild turkey. Years ago, they were confined to just a few locales, extremely rare, or entirely absent. All four can now be seen in one day within 30 miles of Plattsburgh, way up north in Clinton County. That’s evidence of how things have changed.

Which also means there’s little chance I would ever have encountered a snoring eagle, let alone recognized it for what it was. But there’s a bit of evidence supporting the claim of an Adirondack guide in the mid-1800s that bald eagles can saw wood with the best of them.

In 1831, in Ornithological Biography, or An Account of the Habits of Birds, author John James Audubon wrote of bald eagles: “Whilst asleep, they emit a loud hissing sort of snore, which is heard at the distance of a hundred yards when the weather is perfectly calm. Yet so light is their sleep that the cracking of a stick under the foot of a person immediately wakens them.”

In the 1832 version of American Ornithology, written in part by Alexander Wilson (once known as the Father of American Ornithology), the comments of an observer, John Gardiner, are cited regarding bald eagles: “They can be most easily discovered on evenings by their loud snoring while asleep on high oak trees; and, when awake, their hearing seems to be nearly as good as their sight.”

In 1877, ornithologist Henry Minot, while attending Harvard, published The Land-Birds and Game-Birds of New England. Following up on Alexander Wilson’s work, he contributed new material. “The Bald Eagles are usually silent. A young one, which I observed in confinement, snored when sleeping, and, when awake, frequently hissed or uttered extraordinary sounds suggestive of the pig-sty, though not unlike disagreeable laughter. These are the chief items of interest which I can add to Wilson’s account.”

So the experts claim it’s true, and as they describe it, the sound is quite impressive. We can eat like a bird, crow like a rooster, and soar like an eagle. But while it may be accurate, “snore like an eagle” probably won’t catch on anytime soon.

(Eagles aren’t alone in this category. Whether this is a snore or a sleep sound, it’s pretty hard not to call it funny. Scroll down to the two links under Songs and Calls.)