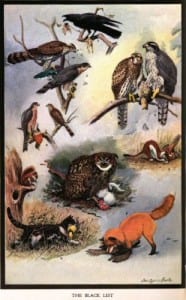 Beware! Pictured here are your adversaries – the official enemies of the state. Don’t be distracted by the pretty colors, lovely feathers, or furry critters. These are vermin, and citizens are urged to kill them at every opportunity.

While some of the phrases used above – “official enemies … kill them at every opportunity … new job requirement” – might sound like exaggerations, they were, in fact, official conservation policies of New York State a century ago.

It was all part of a Conservation Commission campaign in the early 1900s to eradicate undesirables (their word, not mine) from the food chain. The above-named animals were deemed undesirable in the realms of farming and hunting. They were just doing what comes natural – killing to eat, or gathering food – but those foods included barnyard animals, garden and field crops, and the vaguely defined “sporting” game that hunters treasured, particularly grouse, pheasant, and rabbits. Lest you think eradicate is too strong a word, the actual order in the state pamphlet was, “Destroy the Vermin.”

How successful was the campaign? It depends on how one defines success. As a wildlife management program, it was a failure. But as a branding effort, it was off the charts, even altering the long-accepted definition of a word.

The term vermin once referred to cockroaches, fleas, lice, and other creatures who themselves were associated with the words filthy, dirty, and disgusting. Look up vermin today and you’ll find a second, supplemental description: “birds and mammals that prey on game.” Webster’s Dictionary adds a third meaning: “animals that at a particular time and place compete (as for food) with humans or domestic animals.”

While we don’t see lice as competing with us for food, our state officials once designated kingfishers, ospreys, hawks, and the entire official Black List as the equal of lice. By association, those critters were likewise dirty, filthy, and disgusting, which made it not just OK, but imperative that they be destroyed … and the public bought it. Now that’s branding.

When this program began in the early 1900s, state officials cited “the vital importance of unstinting warfare upon ‘vermin’ if a plentiful supply of game and other useful wild life is to continue.”

In support of that dogma, an official Black List of animals was released. Further, 100 NYS Game Protectors were given official vermin lists and brand-new Winchester rifles, “which they are instructed to carry with them at all times when in the field, and to use for the reduction of vermin whenever opportunity offers. Every protector is required to report to the commission the number and kind of vermin which he kills each month.” It became a contest of sorts: conservation officers literally competed to top each month’s kill list.

It was a start, but 100 officers across the state were hardly capable of killing in numbers that would diminish wildlife populations. Help was needed, so an army-in-waiting was enlisted. In 1919, the reverse side of every hunting license featured the state slogan, “Enlist in the Campaign Against Vermin,” along with these instructions: “Shoot all you can of foxes, cats hunting protected birds, harmful hawks, red squirrels, and other enemies of useful wild life. You will benefit both the game and your own sport.”

In an official booklet, the state also proclaimed, “Every sportsman, every farmer, and everybody else who believes in the conservation of useful birds and animals must enlist in the campaign and do his share. Only by such active cooperation, year in and year out, can a definite check be put upon these harmful creatures, and beneficial results to desirable wild life be effected.”

Did it work? Well, the state had 125 game protectors, but about 25 were assigned to urban areas. The remaining 100 each had to cover an estimated 400 square miles. Those same men were also busy enforcing wildlife laws, taking perps to court, issuing permits, and performing a host of other duties.

Still, time was found to comply with the new orders. In 1921, they bagged nearly 2000 crows, 500 cats, and 400 red squirrels. The crow total was admittedly low. The reason? There was “no way to determine the number that died from eating poisoned corn thrown out for them near rookeries” or other areas where they gathered in numbers. No totals were given for the animals taken by private citizens.