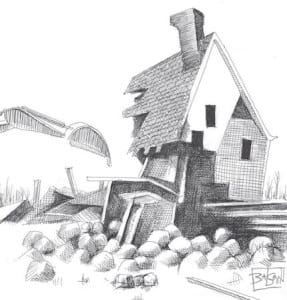 Less than two weeks before, architect and preservationist Walter Aurell was optimistic that the house could be spared. After learning about the unexpected annihilation, Aurell wrote, “It is very upsetting that in a Town whose motto is ‘Rich in History’ we have lost another significant piece of that very history – and its replacement in the public realm will be another strip mall.”

Social media was abuzz in anticipation of an Orangetown Planning Board meeting that was scheduled for April 8th. The disposition of the Lent House was on the agenda. After being approached by Valley Cottage resident Rick Tannenbaum, I was preparing an article titled “Save the Lent House,” hoping to increase attendance at the public session. But on Friday, April 3rd, that meeting was postponed until May 13th.  And after the holiday weekend’s arrival of heavy machinery, my headline, and our Lent House are now history. 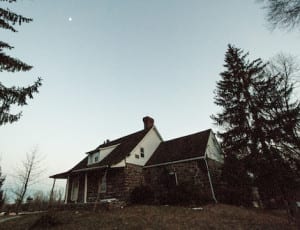 In a letter to Orangetown Supervisor Andy Stewart the week before the building came down, Aurrell reported that “Tom Graff (owner of the land) is on board to work with us.” The objective that Graff seemed inclined to support was to carefully disassemble and move the house to another location. Stewart was also confident that a solution could be found that would satisfy the developer, RD Management, the Graff family and a committed group of preservationists. “As recently as [April 3rd] the owner of the property and the developer of Orangeburg Commons indicated that they shared my understanding of the desirability and feasibility of salvage and rebuilding,” Stewart reported in statement released over on Facebook.

The director of the Orangetown Museum, Mary Cardenas, was one of the many people who thought that progress was being made toward saving the Lent House. She described the building as an “important example of Dutch Colonial architecture that is commonly held by the people of Orangetown as an important part of our history.” Cardenas described the interior integrity of the structure, particularly the ceiling and floor beams as an aspect that made the Lent House ideal for preservation. On Saturday, Cardenas told the Journal News that it was “wrenching to see this piece of history going down.”

Reports suggest that the attorney for the Graffs advised their clients to take the structure down over the Passover/Easter weekend, and in advance of the May 13th planning meeting. The Graffs obtained the demolition permit from the Orangetown Planning Board over a year ago. 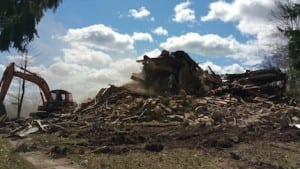 In Stewart’s Facebook statement, the Orangetown Supervisor responded to an assertion by some preservation proponents that he should have withdrawn the demolition permit. “Town attorneys advised…that any attempt by [Orangetown] to revoke a demolition permit that had been lawfully issued last year would have been clearly illegal,” Stewart wrote.

William E. Krattinger, a Historic Preservation Program Analyst for the New York State Division for Historic Preservation issued a resource evaluation for the Lent House in April, 2014 that asserted that the house was eligible for inclusion on both the State and National Historic Registers. Krattinger concluded that “the house was an exceptional example of New World Dutch stone house construction. The main section, 1752, predates the French & Indian War.  It is of large scale, with very high ceilings, and was clearly a house of tremendous stature when built.  It certainly ranks among the best of the stone houses I have seen in Rockland County.”

According to the website, Save Lent House, the home was continually occupied from 1752 until 15 years ago, when the last resident died. It was then purchased and converted to commercial use by the Graffs. However, no application was made to add the property to the National Register of Historic Places. Final application for inclusion on the Register never occurred, as this requires the owners’ consent.

In Rosalie Fellows Bailey’s definitive volume Pre-Revolutionary Dutch Houses and Families in Northern New Jersey and Southern New York, the Lent House is linked to Abraham de Ryck, one of the earliest settlers in New Amsterdam. The home was built in 1752 by or for Abraham Lent. On December 22, 1775, Abraham Lent was made Colonel of the First Regiment of Militia of Fort Orangetown, by the Provincial Congress for the Colony of New York. A genealogy of the Lent family described the Lents as being “very numerous in the Continental Army. They voluntarily took up arms and fought bravely to free themselves from the yoke of thralldom to Great Britain. Sir Henry Clinton said that he could neither ‘buy nor conquer these Dutchmen’.”

Two hundred and forty years later, in the battle to save the Lent House, we did not acquit ourselves as honorably as our revolutionary forebears. The home of Colonel Abraham Lent was bought and conquered on our watch, and not by an invading army, but by a strip mall developer.

Another Dutch Colonial, The John Green House, is also imperiled.  Nyack resident, composer and activist John Gromada has created a Facebook page to support the preservation of  the oldest standing structure in Nyack, Save John Green House in Nyack. I wrote about the significance of the Green House and John’s preservation efforts in this January 2012 Nyack Sketch Log titled Save Our Green House.

Writer Tina Traster, a Valley Cottage resident, is producing a documentary about the preservation and loss of Rockland County’s most precious and historic buildings. She is seeking financial contributions to make the 15-minute documentary film so it can travel around the county and beyond to educate people about the importance of historic preservation. If you want to contribute to her project or if you have resources she can use, please send her an email: ttraster@aol.com