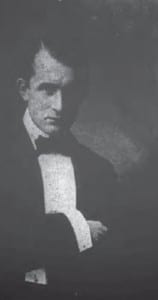 By 1911, Charles Giblyn, now 40, had been acting for more than 20 years and receiving many great reviews for his theater work. That he often stood out was reflected in comments like the following, taken from the pages of the Los Angeles Herald: “Not Yet, But Soon, currently at the Grand Opera House, has just one thing to commend it to theater-goers. This is the acting of Charles Giblyn as a dope fiend. Apart from Mr. Giblyn’s work, the piece is silly, stupid, and boresome.”

He had also managed several stock companies, and in recent years had directed many stage plays and vaudeville shows at LA’s Belasco and other theaters. The experience would serve him well as he plunged headfirst into a new show-business medium: the world of movies.

The birth of the commercial film industry was at hand, and Charles quickly became a main player at the directorial level. By mid-July 1913, the New York Dramatic Mirror noted that “… Giblyn … is making quite a hit by his clever work in the moving picture field.” It was but a hint of what was to come.

The media greeted his film work with near-widespread approval. In 1914, he produced and starred in The Silent Messenger, described as “a brilliant production … a spectacular two-reel drama.” Another of his projects that year was Thieves, of which it was said, “… abounds with life and emotion.”

A measure of one’s celebrity is the minutiae that appears in newspapers and magazines, and in mid-1914, it was noted in entertainment weeklies that, “Giblyn’s daily luncheon is one strawberry shortcake, one plate of ice cream, one-half a pie, one toothpick. We were a witness.” Even his eating habits were being reported, confirming that Charles had truly hit the big time.

Many films from that early period were called shorts, some of them running only ten minutes or so, which meant they could sometimes be produced in only a few days. Among those Giblyn directed (in July 1914) was  By the Sun’s Rays, a silent western film with Lon Chaney, notable today as the earliest (or one of the earliest) Chaney films to survive.

In the two-year span of 1914‒15, Giblyn directed 35 shorts for a number of companies. His services were in great demand, and though he was exhausted and suffered what was termed a nervous breakdown in early 1915, he was back at work within several weeks and maintained the usual pace of production.

Besides being in on the ground floor when the movie industry began, Giblyn in 1915 became one of the founding members of the Motion Picture Directors Association, the forerunner of today’s Directors Guild of America. Among other things, the group emphasized that a film’s outcome depended heavily on the director’s role, the importance of which was sometimes overlooked by studio bigwigs.

Like the Chaney film, many of Giblyn’s movies from those early days retain historic and interesting connections. In January 1916, Peggy was released―the first film appearance of Billie Burke, better known as Glinda, the Good Witch of the North in The Wizard of Oz. In June of that year, he directed The Vagabond Prince, starring H. B. Warner, who became the definitive Jesus Christ in Cecil B. DeMille’s King of Kings (1927), but is perhaps better known to movie buffs as Mr. Gower in one of the best films ever, It’s A Wonderful Life.

In 1916, when Lewis Selznick (father of David, who later produced Gone with the Wind) was forced out of the World Film Corporation, he took with him the company’s biggest star, Clara Kimball Young, and began seeking a capable director for her movies. One of the biggest silent-film stars at the time, Young counted Mary Pickford, Lillian Gish, Pearl White, and Mabel Normand among her peers. Each was considered box-office gold.

Selznick chose Charles Giblyn for the job of guiding Young’s performances, taking advantage of production facilities at Fort Lee, New Jersey, and New York City. In the Bronx, the huge studio known as the Biograph could accommodate six film companies simultaneously. At times, Clara was acting in two movies at once in the same building.

For the next several years, Charles produced some remarkable work for many legends of the film industry, including actors and power-players. He pulled together many projects for the Triangle Film Corporation, which had been formed in 1915 to distribute the films of D. W. Griffith, Mack Sennett, and Thomas Ince. Several big stars, including Fatty Arbuckle and Mable Normand, worked under the Triangle umbrella of film companies, as did Giblyn.

In 1917, Charles handled movies featuring Ince’s new star, Frank Keenan, and those of Clara Kimball Young, Anne Pennington, and Alan Hale, Sr. (father of “the Skipper” on Gilligan’s Island). Among the positive reviews of movies he directed with starlet Constance Talmadge were “one of the most enchanting pictures in years” (for The Lesson); and “just one riot of fun, the laughter never stopping until the conclusion of the story” (for The Honeymoon). Both comments appeared in The New York Clipper.

In 1918, Let’s Get A Divorce, starring Billie Burke, was called “one of the most delightful photoplays recently produced.” It was further noted that “Charles Giblyn’s work as director is careful and painstaking.” Said another reviewer, “Charles Giblyn has directed the picture beautifully.” 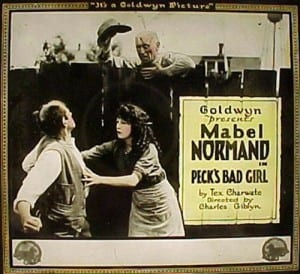 While under Triangle, he made several movies for Samuel Goldwyn, including Peck’s Bad Girl, with major starlet Mabel Normand. Multiple companies sought Giblyn’s services, and in reward for his efforts, Charles was named vice-president of the Selznick Picture Corporation.

In 1919, the Selznicks promoted Olive Thomas as their biggest, newest star, placing her under Giblyn’s direction in Upstairs and Down. In June, the film was launched with more fanfare than any previous production.  Moving Picture World said the quick release was “a tribute to the organizing ability of Myron Selznick and Director–General Charles Giblyn.”

And if the name Giblyn wasn’t already well-enough known in New York City, the advertising campaign for Upstairs and Down made sure of it: three electric signs, each about 900 square feet, dominated Times Square, announcing, “Myron Selznick Presents Olive Thomas in Upstairs and Down. Direction, Charles Giblyn.” That’s about as good as it gets in the Big Apple.

Next week, the conclusion: A third career, working with the legends of filmdom.