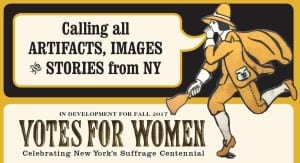 The New York State Museum in Albany has issued a call for artifacts, images and stories for its upcoming exhibit “Votes for Women Celebrating New York’s Suffrage Centennial”, planned for the Fall of 2017.

November 2017 will mark the centennial of women winning the right to vote in New York State. Women in the state played a pivotal role in the struggle for women’s suffrage and equal rights beginning in 1848 with the Seneca Falls Convention through the ratification of the 19th Amendment in 1920 and beyond.

“Votes for Women” will address the struggle for equal rights in the 19th century, the campaign for New York State suffrage, ratification of the 19th Amendment, and the nationally significant role of New York State leaders in regards to women’s rights and the feminist movement through the early 21st century.

To submit a story, object, or photograph for consideration for this exhibition, contact Dr. Jennifer Lemak, Senior Historian and Curator at (518) 474-5842 or via email at jennifer.lemak@nysed.gov.