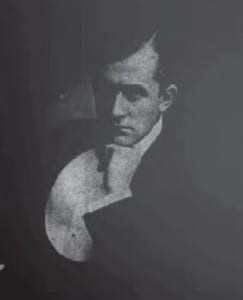 During research, trivial bits of information often lead to the discovery (or uncovering) of stories that were either lost to time or were never told. For instance, did you know that a North Country man once directed Harrison Ford in a movie role as a young adventurer? Or that a coast-to-coast theater star hails from Watertown? Or that a man with regional roots patented a paper toilet-seat protector two decades before it was offered to the public? Or that a northern New York man was once a sensation after posing for a famous calendar? Or that an area resident was the go-to guy for the legendary titans of a very popular American industry?

If you’re at all puzzled, take comfort in knowing that the answers are simple, because one name – Charles W. Giblyn – is correct on all counts. A snippet of news citing him as a former movie director piqued my interest. The follow-up revealed a man possessing star quality and many talents, and an amazing career that today, for the most part, is long forgotten.

Charles Giblin was born in Watertown in September 1871, the oldest of John and Julia Giblin’s ten children. He worked at The Wardrobe, a local store, and then moved to Plattsburgh, where he sold shoes. At some point he developed an interest in show business, and in 1890, at the age of 18, Charles found employment with Harrigan’s Theater on Herald Square in New York City. He was said to have held various positions there, treasurer and private secretary among them.

For a young, aspiring actor, there was hardly a better place to be, for Harrigan’s wasn’t just any theater. Owner Edward “Ned” Harrigan was himself a show-business legend as half of Harrigan & Hart, once the nation’s leading comedy duo for 14 years. (In 1985, Harrigan ’n Hart was a Tony-nominated Broadway show featuring Mark Hamill.) Two media comments help validate Ned’s standing: “What Dickens as an author was to London, Harrigan as a playwright is to New York City,” and, “He was an entertainment pioneer who helped establish and popularize musical-comedy theater in the United States. Ned Harrigan was one of the most beloved theatrical figures of his era.”

Giblin took full advantage of the opportunity to learn from a master, and in December 1890, shortly after turning 19, he was acting in Harrigan’s play, Reilly and the 400. The show was a hit, followed in 1891 by another success, The Last of the Hogans. For Charles, cutting his comedy teeth under Harrigan was priceless. A review of Hogans in the New York Clipper described the second segment as “a rip-roaring, rollicking act, chock full of bustle, mirth, and energetic business.” 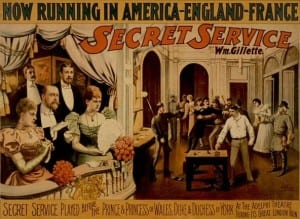 By 1894, Giblyn (early in his career, he changed the spelling of his surname) was performing with the Empire Stock company of Charles Frohman, who became a theater mogul and dominated the industry for two decades. After a couple of years and hundreds of performances, Charles joined the Secret Service company under William Gillett. In 1897, the troupe traveled to Europe, where Secret Service opened to rave reviews in London’s famed Adelphi Theatre. (As an interesting aside, a plaque still marks the theatre, noting the infamous murder of one of the Secret Service actors there in 1897.)

With each successful run, Giblyn’s reputation grew, not only in New York City but elsewhere as well. At Buffalo’s new Teck Theater in 1900, he won many fans with his work for the Shubert company in The Fatal Card. In the “lost-clothes-swimming scene,” according to the Buffalo Courier, “Miss Douglass and Mr. Giblyn set the audience into as hearty a roar of laughter as is often heard in a theater. It was one of the best bits of comedy work yet seen upon the Teck stage.” The Shubert company remained for 17 weeks in what was called “the city’s most successful stock engagement ever.”

In early 1901, he won similar plaudits in Salt Lake City for his work in A Gilded Fool. At the same time, he garnered much attention for his work in another medium: calendars. For 20 years, famed artist Charles Dana Gibson had offered calendars of the iconic Gibson Girls, representing what he called the ideal in feminine beauty. It’s less widely known that he promoted men in the same fashion, and among his original male stars was Charles Giblyn, who was featured in nearly every photograph in the 1901 Gibson Man calendar.

Turning his attention back to the East Coast, Charles visited family in Watertown before joining the cast of Messenger Boy in Buffalo. The city once again welcomed him with open arms and great admiration. His stellar reputation there was further enhanced when, with only three hours to prepare, Charles played two roles in one show, filling in for an actor who had suddenly fallen ill.

In 1904 he traveled north to Montreal with the New York Opera Company, where they performed for the summer. During the next few years, he toured the country with different productions, sometimes focusing on the Midwest or the Northeast.

Already known to many as the great leading man for Morosco, Charles had begun branching out, assuming a leadership role. In 1906 he traveled with and managed a company performing the comic opera Red Feather, a show he took to Ogdensburg in October of that year.

In 1908, he joined the Land of Folly company, opening in Boston and then playing 20 weeks in a chain of American and Canadian amusement parks operated by the owners of New York’s Hippodrome Theater. 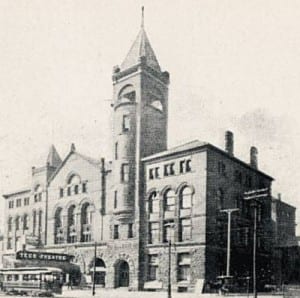 Later that same year, he returned to the West Coast for many high-profile appearances at all the top theaters, including the Burbank, Majestic, and Belasco. Under the Burbank Stock Company, he worked once again for Oliver Morosco, and also re-connected with a show-business friend, Gilbert Gardner.

In another interesting side note, it was while performing in various California shows that the two men joined forces in obtaining a patent for a dispenser of sanitary, disposable toilet-seat covers. As noted earlier, their invention became a viable commercial product 20 years later.

Giblyn was also known as somewhat of a traveling museum, carrying all sorts of souvenirs from around the world and displaying them backstage. His trophies consisted of whatever drew his interest, the most recent example being a boxing glove worn by the champ during a lightweight title bout that ended with a knockout.

Part 2: Pioneering in the world of entertainment.