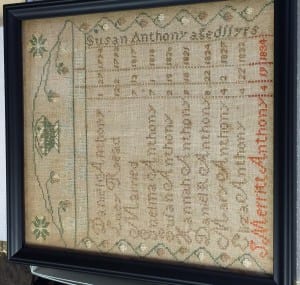 A cross-stitch sampler created by Susan B. Anthony over a three-year period beginning in 1831 has been returned to the National Susan B. Anthony Museum & House. The artifact has been in the care of conservator Sarah Stevens of Zephyr Preservation Studios.

“Susan B. Anthony had this sampler prominently displayed in her office when she was in her eighties, so we know that it was important to her,” Deborah L. Hughes, President & CEO of the Anthony Museum, said. “It is precious today because it connects us personally to young Susan and her family. This was her handiwork, long before she was the Great Reformer.”

A second artifact, a pair of kid gloves belonging to Susan B. Anthony and said to have been worn at her 50th birthday party, has been on display at the Museum of the City of New York since December 2014. The gloves will be on display at the Anthony Museum through August 2015.

The conservation work was made possible through a 2014 Museum Conservation Treatment Grant by the Greater Hudson Heritage Network, in association with the New York State Council on the Arts (NYSCA).