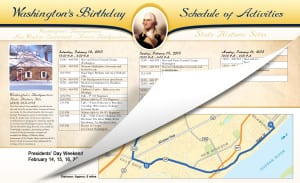 Depending on where you are or who you talk to, the third Monday in February represents either Presidents’ Day or Washington’s Birthday. At three Revolutionary War historic sites in the Hudson Valley, the day is part of a three-day celebration of George Washington.

The schedule of activities gives a basic description of each site, contact information, and a map to assist visitors with navigating between locations. The schedule can be downloaded here or found on FSHSHH’s Facebook page.

Admission to the events is free, but donations are requested. Support for these programs is provided by the Palisades Interstate Park Commission, the Palisades Park Conservancy, and the Friends of the State Historic Sites of the Hudson Highlands. 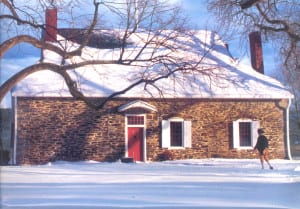 Washington’s Headquarters will be open all three days between 12:00 PM and 4:00 PM. A George Washington re-enactor will begin the celebration each day by cutting through his birthday cake. The historic headquarters will be open to the public where they will be greeted by the General and other interpreters in period dress, while musician Thad McGregor provides musical entertainment.

Reenactors from the 5th New York Regiment, Lamb’s Artillery, 2nd New York and 5th Connecticut Regiments will be performing military drills and giving presentations about their regimental history. At the end of the day their activities will culminate in a review of the troops by the General.

In the Museum, children can make a take-home craft and guest speakers will offer talks on 18th century subjects:

Author Jack Kelly will speak on the subject of his book, Band of Giants: The Amateur Soldiers Who Won America’s Independence, giving a more personal view of the important but lesser known figures of the Revolution.

Guest speaker Matt Thorenz will deliver his talk “Black Patriots Revealed: The Black Presence at New Windsor Cantonment…” about the valuable contributions Continental soldiers of African descent made to the Continental Army during its final winter encampment at New Windsor, New York in 1782-83.

Aaron Robinson, Interpretive Programs Assistant of Washington’s Headquarters, will present his talk, “Loyalists: The Other Side of the American Revolution,” highlighting the side of the war that is not often mentioned today, the side of those who decided not to rebel against the Crown.

Karen Monti, site interpreter, offers an interactive program titled “From Petticoats to Breeches: Unveiling 18th Century Clothing” to provide insight into the lives of 18th century people and what they wore. Examples of 18th century clothing will assist in creating a more complete picture of the uses, reason, and choices of such articles of clothing made by individuals from that era.

Matthew Colon, site interpreter, invites the public to look back upon the field of 18th century medicine in his talk, “18th Century Medicine: the Physician, the Silver Bullet, and the Revolution”. Discover how the stories of local doctors reveal true concern for their fellow man or elevate others as heroes at a time of war.

Lynette Scherer, site interpreter, in her talk, “‘To Save the Innocent, I Demand the Guilty’ A Tale of Two Revolutionary War Prisoners,” will tell the story of two prisoners; one hanged, one too young to die. Learn how these two captive soldiers nearly derailed the impending peace and caused an international incident for General George Washington in Newburgh, New York.

Washington’s Headquarters State Historic Site is located at the corner of Liberty and Washington Streets within the City of Newburgh’s East End Historic District. For more information call (845) 562-1195. 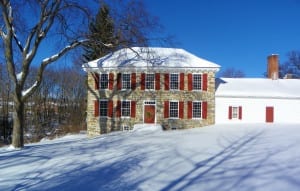 This elegant stone house, also known as “Mount Ellison”, is a genteel combination of English and Dutch-style and was built for the prominent local merchant Colonel Thomas Ellison.

During the American Revolution, Continental Army Generals Nathanael Greene, Henry Knox, and Horatio Gates used this house as a military headquarters.  Inside these walls, General Knox planned and directed the gathering of the artillery that was used to win the Battle of Yorktown, Virginia, in 1781.  In 1783, Major John Armstrong, at the urging of nationalists in the Continental Congress, wrote the Newburgh Addresses, calling for the army to menace the government with military force.

Knox’s Headquarters is located at 289 Forge Hill Road in Vails Gate, New York, three miles south of the intersection of I-87 and I-84 and one mile south of the co-located National Purple Heart Hall of Honor and the New Windsor Cantonment.  For more information please call (845) 561-1765, ext. 22. 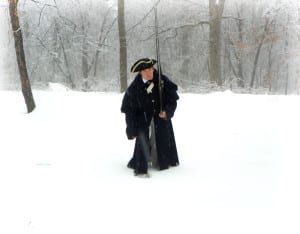 The nearby New Windsor Cantonment is open on Saturday and Monday between 10:00 AM and 4:00 PM. Soldiers will bring to life the Continental Army’s final winter encampment with blacksmithing and medical demonstrations, and other aspects of daily life. On both days at 11:00 AM, 1:30 PM and 3:30 PM, see musket and cannon demonstrations.  Following these firings, children enlist in the Continental Army, drill with wooden muskets, and get paid in Continental currency for their service.

Following the capture of British forces by the allied armies of France and America at Yorktown, the northern Continental Army returned to the Hudson Highlands.  This significant defeat of the British field army in the south broke England’s will to continue the struggle.  In the fall of 1782 near New Windsor, 7,500 Continental Army soldiers built a city of 600 log huts. Along with some of their family members, they braved through the winter and kept a wary eye on the 12,000 British troops in New York City, just 60 miles to their south.

During the winter of 1782-83, discontent filled the New Windsor encampment as the men bitterly reflected upon their ill-treatment by an ungrateful nation. Heavily armed and angry, the disgruntled officers and soldiers of the Continental Army were the biggest threat to the future of the country.

Friends of the State Historic Sites of the Hudson Highlands

The Friends of the State Historic Sites of the Hudson Highlands (FSHSHH) is a registered 501(c)(3) non-for-profit organization that exists in order to benefit three New York State Historic Sites – Washington’s Headquarters, New Windsor Cantonment, and Knox’s Headquarters. The supported historic sites gain from this organization’s mission to increase public awareness of the three sites’ historical and educational significance; to raise funds to be used to supplement the educational, programming and collection needs of the sites; and to offer quality education and history related items for sale to site visitors.

For more information in regard to membership contact them at Friends.SHSHH@gmail.com.